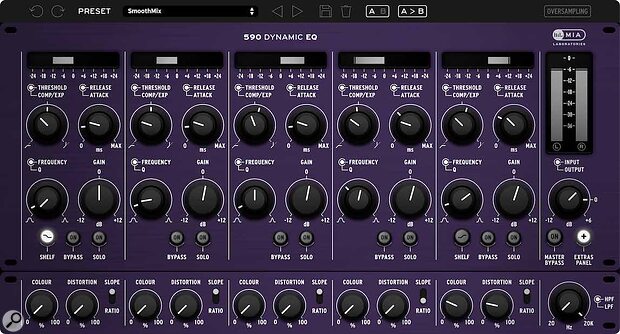 MIA Laboratories have an expanding range of software based on premium hardware processors found in the world’s best recording studios. Their latest plug-in, the 590 Dynamic EQ, couples a dynamic equaliser with two types of analogue modelling saturation that can be applied to each individual frequency band.

The 590 offers five bands of dynamic equalisation which can each be operated in compression or expansion modes, with attack and release times of up to 200 and 2000 ms respectively, and all feature the custom envelope detector used in the company’s 925 and 409 compressors. Each band offers a peak filter with a gain range of -12 to +12 dB and a variable Q control, whilst switchable low- and high-shelf options are available on bands one and five. Slope and Ratio modes are provided on a per-band basis, with the former offering a subtle response, and the latter exhibiting a more aggressive sound. The 590 is also equipped with global low- and high-pass filters.

A Colour knob on each band applies a set of filters from the company’s Musiqual EQ Series, enhancing the harmonic and subharmonic frequencies, and offering a distinct change in timbre. Bands one and two use Musiqual Red, which emulates the effects of a valve preamp, whilst the remaining bands utilise Musicqual Blue, which has been inspired by Class-A preamps. Further variety is offered by a Distortion knob, again available on each individual band, which emulates the harmonic distortion introduced by a triode valve amplifier being driven into distortion.

A bar along the top of the plug-ins GUI offers access to a selection of presets, as well as allowing users to save and recall their own settings. Different configurations can be compared using a built-in A/B feature, and undo and redo tools are also provided.

The 590 Dynamic EQ is supported on PCs running Windows 7, 8, and 10 (64-bit only), and Macs running macOS X 10.7 or higher. AAX, AU, and VST3 versions are available. The plug-in is licensed via iLok, and requires the latest version of iLok Licence Manager and an iLok account. iLok 2nd generation or and higher dongles are supported, as is iLok Cloud.

The 590 Dynamic EQ is available now from the MIA Laboratories website, or though Plugivery’s worldwide network of pro audio resellers. An introductory price of $49 is being offered until 15 January 2023, after which the plug-in will be priced at $129.