The MPG (Music Producers Guild) have announced that submissions for their 2023 awards are now open. Any material released between 1 October 2021 and 30 September 2022 is eligible, with a shortlist being announced in February 2023 following a vote by full MPG members.

A judging panel made up of a range of music industry professionals will then vote for the winners, who will be announced at a ceremony at The Tower Hotel, London, UK, on 27 April 2023. Sound On Sound is pleased to announce that it will be an official Media Partner of the 2023 awards.

A total of 14 categories are open to entries from anyone, including non-MPG members. Submissions are being accepted online via the MPG website, with a further three categories in the gift of the MPG. In order to keep up with the ever-changing industry, a new ‘Dolby Atmos Mix of the Year’ award has also been introduced for this year’s event. 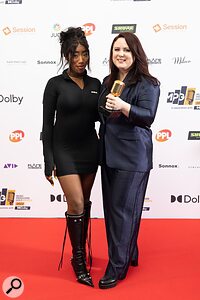 Songwriter Kamille presenting Manon Grandjean with the Mix Engineer of the Year award at the 2022 MPG Awards ceremony.Photo: Blake Ezra Photography LtdThe awards categories open for submissions are as follows:

The awards in the gift of the MPG are:

“We are particularly excited to announce the new ‘Dolby Atmos Mix of The Year’ award. As representatives of producers and engineers, these awards strive to celebrate the excellence in our industry and inspire the next generations. That’s why it is essential that the awards reflect our constantly evolving industry, and including this award is a part of that. - Cameron Craig, Executive Director of the MPG

Early bird tickets for the ceremony will be available to purchase on the MPG website between 21 November 2022 and 31 January 2023.

More information, along with submission forms for this year’s awards can be found via the link below.