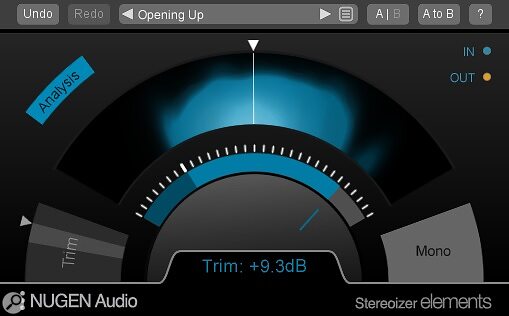 Nugen Audio, the Leeds, UK-based plug-in team behind the unique Paragon reverb, are due to release a cut-down version of their Stereoizer psychoacoustic processor. The new Stereoizer Elements employs all the same stereo trickery as the original, but combines multiple parameters into one user-friendly slider.

So, when you increase or decrease the width in Stereoizer Elements, you're actually performing a number of actions simultaneously. There's a simple Mid-Sides matrix under the hood, as you might expect, but added to that are algorithms that Nugen call Interaural Time Difference (ITD) and Interaural Intensity Difference (IID). ITD takes advantage of time-of-arrival differences between the left and right channels to manipulate the listener's sense of sound localisation. It's akin to moving the mics in a spaced stereo array nearer or farther apart, but the processing is apparently much more involved than simply adding Haas delays, and is also said to be completely mono compatible.

IID, meanwhile, relies on left/right level differences for sound localisation, and is somewhat analogous to adjusting the mutual angle of a coincident mic array — although again, there's rather more to it than that. Nugen were kind enough to give SOS a demonstration of Stereoizer Elements at the virtual NAMM 2021 show, and as we understand it, the IID processor essentially creates artificial differences between the left and right difference (the Sides), while leaving the sum (Mid) intact. This approach means it's also capable of adding width to mono sources, again without compromising mono compatibility.

Absolutely none of which the user needs to know, because it's all hidden behind a single slider. All you need to do is decide how 'stereo-y' you want your audio to be, and Stereoizer Elements does the rest. It's due to go on sale imminently, for just $49, and Nugen tell us that Elements versions of a number of their other plug-ins are on the way too.