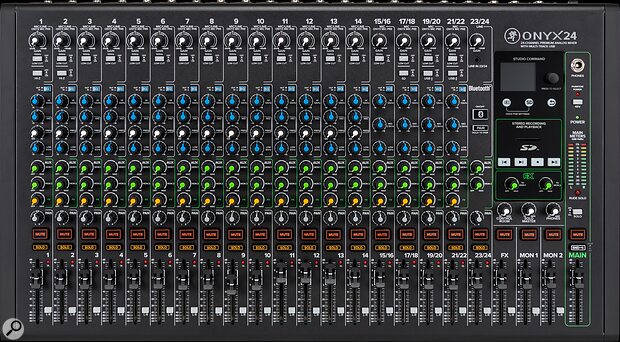 Mackie's headline NAMM announcement is the resurrection of the Onyx range of mixers. The original Onyx 1620, released way back in 2004, pioneered the multitrack 'mixerface' format, but while that model used Firewire as its interfacing protocol, the new generation connects via the ubiquitous USB.

There are four new Onyxes in the range: the Onyx8, Onyx12, Onyx16 and Onyx24, all named after their input channel count. All can send multitrack audio of all of their inputs to a connected computer via USB (or to an SD card, sans-DAW), and they can also stream two stereo channels from your DAW.

As is often the case on compact mixers, the input count is made up of a combination of mono and stereo channels, with the mono inputs sporting swept-mid EQs and the stereo channels having a fixed mid band.

All the newcomers share the same effects engine, controlled using a colour screen and rotary encoder (with which you can also access the SD card recording options). The per-channel send controls are internally routed to the effects (which include all the usual delay and reverb options, plus some modulation treatments), but the effects bus is also present on a rear-panel jack, should you want to use your own outboard processor. All the new Onyxes also have at least one pre-fader monitor send, with the largest model having two.

Each channel features switches for routing to the mix bus, mute and solo, a high-pass filter and, very usefully, EQ bypass. Channels 1 and 2 on each mixer can also accept high-impedance instrument signals, via their jack inputs and a Hi-Z switch.

Separate mix and control-room outs make these Onyxes suitable for both live and studio use. On stage, their ability to accept a stereo audio stream over Bluetooth could come in handy for interval music, while the multitrack USB interfacing obviates the need for a separate interface, with the mixer itself will making it easy to set up up latency-free foldback mixes.

Will Gregory: My Favourite Synths
6 days 31 min ago.