Mackie have added four new microphones to their EM Series, which they say are aimed at meeting the needs of today’s on-the-go content creators. 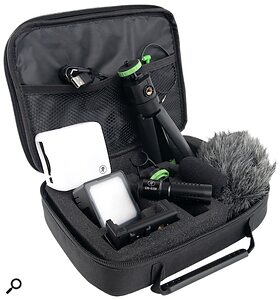 The EM-93M is an ultra-compact directional microphone which has been built for both portability and performance. Mackie say that the microphone delivers the clear, well-defined sound that will give users’ content a professional edge, and the compact design means it can be mounted discreetly on a DSLR camera or smartphone. Intended as a plug-and-play solution, it comes with multiple connecting cables and the required mounting hardware, as well as a shockmount and wind-shield.

The EM-93MK is a complete kit which contains an EM-93M microphone with both furry and foam wind-shields, along with a versatile gimbal tripod with extension pole. As well as taking care of the user’s audio needs, the kit also contains a variable temperature LED video light with a diffuser, and three different cold shoe mounts for compatibility with a DSLR or other device. 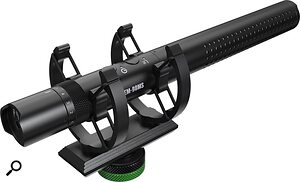 The EM-98MS is a shotgun microphone that promises to capture broadcast-quality audio with maximum focus and directivity, rejecting off-axis background noise. The microphone is equipped with a high-pass filter which can operate at 75 or 150 Hz, a variable gain control, and a built-in headphone output allowing users to monitor their audio during recording.

It is powered via its own rechargeable lithium-ion battery, and features an auto on-off function as well as an overdrive protection mode. The EM-98S comes supplied in a carrying case complete with two different wind-shields, a shockmount, and cables. 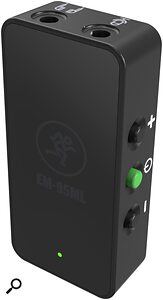 EM-95ML is a lavalier microphone that comes paired with its own integrated in-line amplifier, intended to be used with both smartphones and DSLR cameras. The microphone itself features a professional quality omnidirectional condenser capsule which Mackie say delivers a crisp, detailed sound. The amplifier features an adjustable gain control, and can be recharged via an included USB-C cable.

The new EM Series microphones are available now from the Mackie website or via authorised dealers worldwide, with pricing as follows: