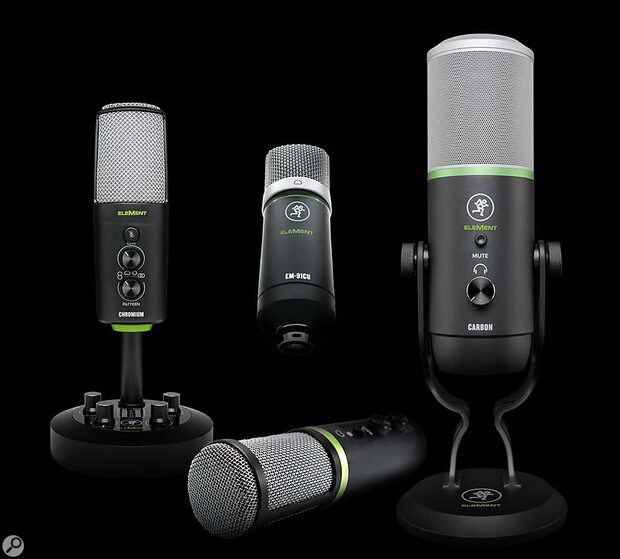 Mackie's recent expansion into the microphone market continues, with a trio of affordable USB models. The EM-91CU is essentially a USB version of the EM-91C, which we reviewed back in August. It's a straightforward affair, with just a USB output and no headphone monitoring, and is billed by Mackie as an ideal starter mic for podcasting, live streaming and remote learning.

Moving further upmarket, we have the Carbon, which lets you switch between all the common polar patterns, and even includes a stereo option. This model employs the same Onyx preamp found in the company's popular VLZ-series mixers, and features a gain control, a mic mute button, and a headphone output with volume knob. It even comes with an impressive bundle of software, including Pro Tools First and Tracktion's Waveform DAW, plus a host of extra plug-ins.

Finally, the Chromium incorporates in its base a quarter-inch DI input, a stereo aux mini-jack input, plus a two-channel mixer, letting you put together guitar-plus-vocal demos and the like without needing any other gear. Like the Carbon, it offers a range of polar patterns plus a stereo recording mode.

A number of options for the new mics have also been unveiled, including the DB-100 desktop boom arm mount, and the PF-100 pop filter.

In other Mackie news, the company have also unveiled a new affordable pair of headphones. The MC-100 is a closed-back design that Mackie say makes the sound of their more upmarket cans more affordable than ever. They're priced at just $29.99, and look likely to be included in Mackie podcasting bundles, alongside the new USB mics, in the very near future.