Focusrite have made two exciting announcements — the first pertaining to their acclaimed Clarett series of USB audio interfaces, and the second being an expansion of their professional RedNet networked audio range.

First, the Clarett news. For a limited time, anyone who buys a Clarett USB audio interface or Clarett OctoPre ADAT expander will also get a huge bundle of software thrown in. The Clarett series already ships with a generous supply of plug-ins from Brainworx, Focusrite and Softube, plus a copy of Ableton Live Lite, but the new Hitmaker Expansion adds some serious processing power, in the form of: 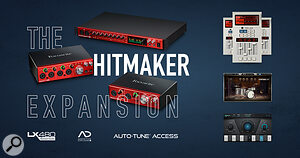 The Hitmaker Expansion will come free with any Clarett USB interface or ADAT expander purchased before the end of December, 2020.

Next up, the new RedNet arrivals. The RedNet R1 is a desktop unit, the top panel of which is dominated by two large hi-res colour displays. It offers control over other Red-series interfaces, and has huge monitoring potential including the ability to control surround and Atmos speaker setups. You can use it to A/B between different speaker setups, and it even provides four downmix memories for instant checking on a range of surround/Atmos configurations.

The Red 8Line, meanwhile, is a 1U rack that provides a number of different audio I/O, including instrument inputs and headphone outs, and can connect to both Mac and Windows computers by way of Avid DigiLink, Thunderbolt or Dante protocols.

Finally, Focusrite have updated their A16R and D16R interfaces. Like their predecessors, they provide 16 I/O of audio connectivity (analogue in the case of the A16R, or AES3-format digital audio for the D16R), and can pipe those audio streams to any other device on the same Dante network.

There's some extra good news for existing Red-series users, in the form of an upcoming Windows driver for Focusrite's Red Thunderbolt interfaces, which will soon be able to work on Thunderbolt 3-equipped Windows 10 PCs. That updated is expected to land next month.

Pricing for the new RedNet models is as follows: