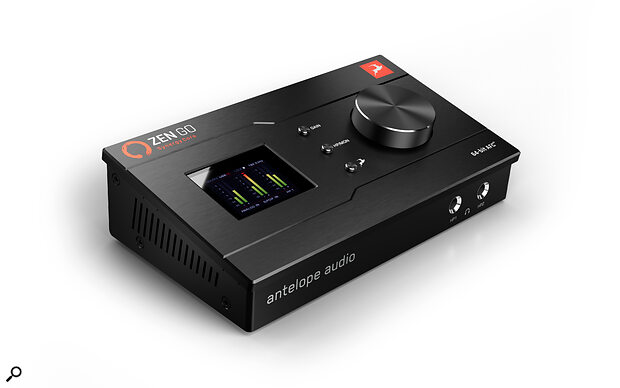 The Zen Go's four inputs comprise a pair of mic/line/instrument combi-jack/XLR sockets plus a stereo S/PDIF input, while its outputs include a stereo analogue pair (duplicated on balanced jacks and unbalanced phonos, and controllable from the top panel), a S/PDIF out, and twin headphone sockets on the front panel.

Most impressively, given that all its power is drawn from the USB-C connection, the Zen Go still houses a Synergy Core, the combined DSP and FPGA signal processor that acts as host for Antelope's real-time analogue modelling technology, and which has become a fixture in the company's recent releases.

No fewer than 37 Synergy Core processors are provided with the Zen Go, these including two preamp emulations, four EQs, five compressors, 22 guitar amps and cabiners, a reverb, a guitar tuner, an expander and a gate. Furthermore, when powered from a standard USB charger, you can take full advantage of the Synergy Core processing even without a computer connection.

Antelope's new Zen Go interface is set to be attractively priced a whisker under $500/€500.