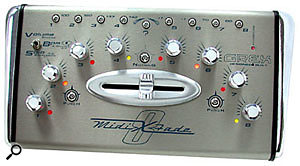 Inspired by performance DJ techniques and technology, the device, which was created by the man behind the Latronic Notron performance hardware sequencer of a few years ago, is centred around a crossfader and a pair of punch buttons. These buttons can be used to fade and cut between any of up to eight stereo audio tracks running on the software loop host of your choice. This is just the tip of the iceberg, however, and the unit’s knobs and buttons can be used to issue a vast range of MIDI-based commands.
The MXF8 has three main operational modes — Volume mode, BPM mode and Solo mode — which are selected using a small three-position switch. The unit’s knobs, each of which is accompanied by a three-colour status LED, can be used to control volume and panning, effects settings, loop length and start point. Eight numbered buttons along the top of the unit are used to mute and un-mute the eight tracks, to select groups for soloing, to trigger loops, to apply rhythmic gating and to adjust global tempo (in small increments or large steps), depending on the selected mode of operation.
The large central button labelled Nothing acts as a kill switch (hence producing exactly what its label proclaims!), but, like the ‘?’ button, performs numerous other functions when used in combination with the unit’s other controls. (The ‘?’ button, incidentally, is apparently so labelled because the designer hates the word ‘Shift’!)
A fourth mode, the so-called Ratio Sequencer, is accessed by restarting the MXF8, and divides the crossfader’s travel into quantised zones which intelligently trigger and retrigger loops at decreasing intervals (once every bar, once every quarter note, once every eighth note and so on) for some extreme rhythmic effects. If different loops are assigned to tracks accessible via the MFX8, the Ratio Sequencer can be used to retrigger one loop while the other continues playing, allowing you to offset or ‘slip’ one loop with respect to the other, and experiment with the different rhythmic feels this produces.
The MXF8 is small and portable, weighing less than 2kg, and is powered by an external adaptor. Its single MIDI output port doubles as a MIDI input for receiving software updates, including new crossfader maps and control configurations. You can order the MXF8 from the Grex Ultra Dynamics web site, where you’ll also find a range of audio and video demos. It costs £264.38.
E sales@grexultra.com
W www.grexultra.com
Previous storyNext story

Will Gregory: My Favourite Synths
5 days 30 min ago.