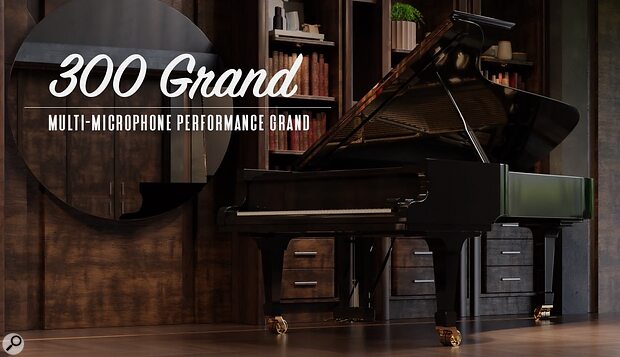 Production Voices have announced the release of 300 Grand. Their most ambitious piano library to date, this latest offering consists of over 100,000 samples from a Yamaha CFX grand piano recorded in a concert hall from nine microphone positions. Covering everything from lyrical pianissimos to bold, forward sounds, Production Voices say that 300 Grand is ideal for studio and stage productions, film scores, practice, performance and more.

Up to 36 velocities per note are available across the entire keyboard range, for both pedal up and pedal down positions. Aware of the impact this approach has on RAM usage, Production Voices have also included some patches that offer 16, 22, 30 and 32 velocity options to help improve load times and memory usage on less powerful systems.

The samples have been captured with equipment of the highest quality, with the nine microphone arrays which utilise models from Neumann, Coles, AKG, Schoeps, Sennheiser and more being fed into preamps from the likes of API, Focusrite and Millennia. Finally, converters from Lynx and Apogee have been employed to take care of the A-D stage. In addition to traditional stereo arrays such as XY and Blumlein, a Soundfield MK V has been used, capturing an Ambisonic signal that can be routed to the user’s DAW for further processing. 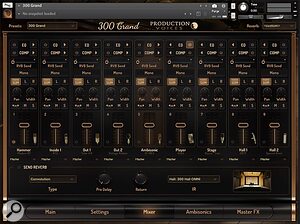 300 Grand features a comprehensive on-board mixer, as well as supporting multiple outputs for routing to a DAW mixer.The library runs within Native Instruments’ Kontakt Player, and is also compatible with the full version of Kontakt 5.8, as well as Kontakt 6 and above. NKS compatibility is also provided, allowing for full integration with Native Instruments’ controller keyboards. Installing via Native Access requires 110GB of free space when installing to an external drive, or 170GB of free space to install to the system drive. Once installed, the library occupies 73GB of space, and the additional space required for the installation process is recovered.

A dedicated mixer window within Kontakt offers an emulated SSL mixer, with EQ and compression available on every channel. Each microphone signal is available separately, with all channels equipped with panning, solo and mute controls, and pre-fader sends which feed a built-in reverb. All of the parameters within the mixer are also fully automatable. In addition to the comprehensive mixer, multiple outputs from Kontakt are also supported, enabling users to send every channel to their DAW mixer individually if desired.

To get an idea of what the library has to offer, check out the demo video below.