Express and OK! Proprietor, Richard Desmond and Roger Daltrey of The Who, created The RD Crusaders in 2003. They have raised around £8m to date for charities including The Teenage Cancer Trust, the charity devoted to improving the lives of teenagers and young adults with cancer.

The line up will feature some of the world’s most successful and popular musicians. Who front man, Roger Daltrey, and singing sensation, Lulu, will be joined by Russ Ballard of Argent and Rick Wills of Foreigner and Bad Company. Completing this unbelievable line up will be Steve Smith, Zoot Money and Richard Desmond. 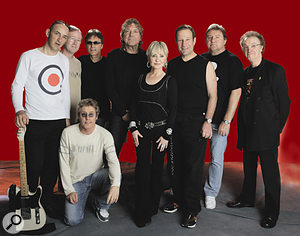 The group will take to the stage on Sunday at 3.30pm for what promises to be a truly unmissable event! Tickets are £15 per head and are very limited. They can be purchased from London International Music Show with all proceeds going to The Teenage Cancer Trust.

Simon Davies, Chief Executive of Teenage Cancer Trust says, “I am delighted that once again the RD Crusaders are giving their time to this wonderful event. It will certainly be the climax to a very exciting occasion. I would also like to express my thanks for the proceeds, which will be coming to Teenage Cancer Trust. TCT builds specialist units in NHS hospitals for teenagers and young people with cancer – each unit costs us £2 million, all of which we have to raise – and so events like this are so important, and will help us with our goal of ensuring that all young people have access to a specialised treatment centre for cancer.”

Celebrities from the world of music, including Radio One DJ Colin Murray, Jason Bonham from Led Zeppelin, Red Hot Chili Peppers’ drummer Chad Smith, Courtney Pine and internationally acclaimed guitarist Joe Satriani will be there to offer encouragement and insight into how to get in and on in the business.

The London International Music Show runs for four days (12 – 15 June) and is set to represent the entire music industry. As the only event of its kind, the show will play host to a musical community of like-minded people at ExCeL London.

Click here for more information on Sound On Sound's involvement with LIMS and the SRT show.
Previous storyNext story