Published 16/9/15
Learn studio techniques from studio legend, or be recorded! 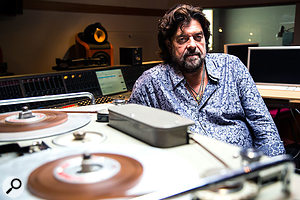 Don't miss this chance to record with Alan Parsons at Abbey RoadIf you’ve ever wondered what it must be like to record at Abbey Road with a top producer at the helm, you might be able to experience this in person in November as Alan Parsons launches a New Recording Artist search to take part in one of his two upcoming Master Class Training Sessions at the legendary recording studio, in association with Sound On Sound.

November’s masterclasses will be Alan’s much-anticipated homecoming to the studios where he trained and worked as an assistant engineer during the recording of the last two Beatles albums, Let It Be and Abbey Road.

Alan is holding two 2-day MCTSs: Session 1 on November 16-17 and Session 2 on November 18-19, both working in Abbey Road’s Studio 3, where Pink Floyd recorded Wish You Were Here.

At Session 1 Alan and the Attendees will record the contest winner of a New Recording Artist 2015 challenge. “This really is a golden opportunity,” says Julian Colbeck. “We’re not just hoping to unearth new talent we’re going to record new talent—in the greatest recording Studio in the world, produced by Alan Parsons.”

As well as getting to see the legendary Abbey Road studios, the MCTS workshops are serious learning opportunities, where attendees assist Alan on routining and arrangement decisions and will study, and be part of, all the technical processes including instrument miking, live tracking, instrumental overdubs, recording vocals, processing and mixing.

On the weekend before the first MCTS, Alan also delivers the inaugural Sleeve Notes lecture series at Abbey Road. Moderated by David Hepworth, the address, entitled From Mono To Infinity, the lecture examines the role that recording technology played in the music created during Alan Parsons’ tenure at Abbey Road. The title should tell you where he started and ended up!

Full details of the sessions, lectures and the New Recording Artist contest are on the web site of Alan’s famed instructional video series: Alan Parsons’ Art & Science Of Sound Recording.