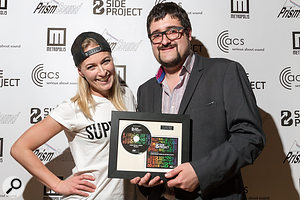 DJ, producer and judge Krystal Roxx (left) with one half of producer duo Chemikal Recipe, last year’s public vote award winner.Launched in 2009, B-Side Project is an annual remix competition that pairs artists with remixers from around the world, with the best 10 resulting tracks rewarded by an album release. Last year, over 180 musicians and producers from 18 different countries took part. This year the competition, which is sponsored by Prism Sound, is set to be bigger than ever. Registration is now open, and 200 musicians and 200 producers will be allowed to take part via the Blend.io online collaboration platform.

Each musician enters an original track, which is then sent to a music producer from elsewhere in the world. While the pairings are said to be chosen at random, the organisers also say that they are designed to ensure that everyone involved works with a genre that they would not normally have chosen, from another country and culture. Once completed, the remix tracks will be assessed by the panel of judges, which this year includes Nu:Tone, La Roux, Luca Pretolesi, Martin Glover (aka Youth) and Roni Size. The competition culminates in the Remix Awards event at Metropolis Studios in London, held on December 1st 2016. Metropolis will also master the top 10 remixes, which are then released on B-Side Recordings, distributed by Republic Of Music and published by Metropolis Music Publishing, benefiting both the original artists and the remix producers equally. It’s an exciting idea, all designed to encourage new and unexpected collaborations while at the same time giving musicians, solo artists, singer-songwriters, bands and remix producers of all genres and levels a platform to promote their music and advance their careers. Head to the B-Side Project web site now if you’re interested in taking part.