Published 29/6/17
Could this point to a revolution in studio design? 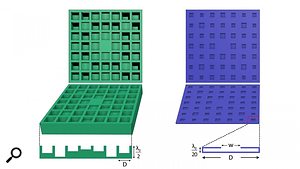 Schroeder diffuser (left) versus new design, right.Researchers from Nanjing University are claiming to have invented a new type of acoustic diffuser that is 10 times thinner than existing designs while delivering the same performance. Unlike a standard Schroeder diffuser, which features a grid of open sound wells of varying depth, this new “ultra-thin” diffuser instead employs identical shallow chambers fronted by apertures of varying size. The researchers say that, while the traditional design requires a depth of about half the wavelength of the lowest sound it needs to diffuse, making Schroeder diffusers impractical for tackling low-frequency energy, their system of square cavities with different neck widths needs a thickness of just 5 percent of the sound’s wavelength to be effective.

The research paper, published in the journal of the American Physical Society, points to both mathematical models of the design in action and experimental tests carried out with 3D-printed prototypes. Though still in the research phase, this new design opens door for much thinner and, potentially, much cheaper diffuser panels for use in the studio, concert halls and industrial applications.