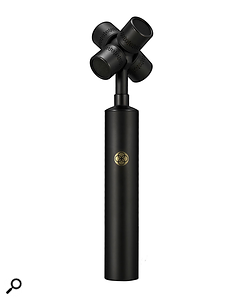 Australian mic makers Røde have announced their first foray into the world of ambisonics. Under the newly dubbed SoundField by Røde brand — the result of an acquisition in 2016 — the company will release the NT-SF1, a broadcast-grade, 360-degree surround sound capture microphone.

The mic itself features four of Røde’s all-new, low-noise ½-inch TF45C capsules in tetrahedral array, for four-channel, A-format recordings. With there being four capsules, having low self noise is of paramount importance when it comes to tetrahedral arrays like this. No expensive SoundField decoder hardware is required here either, just a plug-in that allows users to transform and manipulate signals in B-Format.

Røode have also brought their Australian manufacturing expertise to bear in order to keep costs low while still producing what we expect to be a high-grade product.