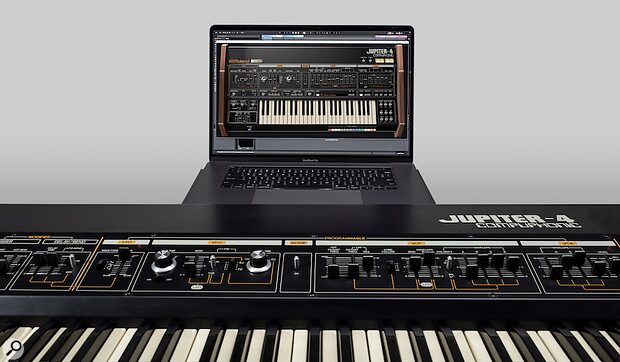 Roland have announced the release of the Jupiter-4 Software Synthesizer. This recreation of their first polyphonic synthesizer becomes the latest addition to the Legendary Series available through Roland Cloud. As well as being delivered in the form of a plug-in for use in a DAW, the Jupiter-4 is also available as a ‘plug-out’ for the company’s System-8 synthesizer keyboard.

Roland say that their Analogue Circuit Behaviour (ACB) technology brings the Jupiter-4 to life through the careful analysis of original hardware units, circuit diagrams and other historical data. This information is then used to recreate the behaviours of the original instrument, including all of its quirks and instabilities. New Circuit Mod and Condition controls have been added, allowing users to adjust the overall ‘character’ to suit their own tastes.

As well as recreating the single VCO, filter and LFO sections of the original, some features have been enhanced to fit in with more modern workflows. These include an extended oscillator range, adjustable noise, velocity sensitivity, sub-oscillator volume control, and a flexible arpeggiator. In addition to the Ensemble chorus effect from the original keyboard, Roland have added phaser, flanger, overdrive, reverb and delay effects.

The plug-in features a resizable UI, and supports VST3, AAX and AU formats, as well as providing native compatibility with Apple’s M1 and M2 chips. Full integration with System-8 is on offer, with users able to control the plug-in from the keyboards panel, or utilise the plug-out functionality to turn the System-8 into a standalone eight-voice Jupiter-4 for stage and studio performance.

The Jupiter-4 Software Synthesizer is available now through Roland Cloud, with Pro and Ultimate memberships priced at $99 per year and $199 per year respectively.