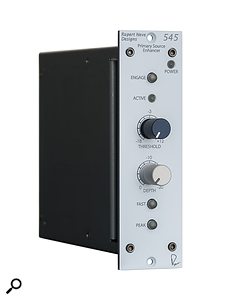 While the Rupert Neve Designs name has always been synonymous with studio recording, the company have today made two announcements that mark a shift towards live sound. The first is the announcement of the brand new 545 Primary Source Enhancer, a 500-Series version of their acclaimed Portico 5045 analogue feedback eliminator. The second is confirmed pricing for the RMP-D8 Remote Control Dante mic preamp that they previewed at NAMM in January.

Based upon the circuitry in the company’s 2-channel Portico 5045, which is currently in use with countless tours, arenas, houses of worship and broadcast stages worldwide, the 545 is a 500-Series compatible mono device for vocal or instrumental feedback reduction applications. According to Rupert Neve Designs, the 545 “delivers the world’s most natural feedback reduction and adds focus to your primary sources.” Allegedly, this effectively increases the level of a live microphone signal before feedback by up to 20dB. Unlike more traditional devices in this market, the 545’s all-analogue signal path doesn't use filtering or digital processing and is also built around Rupert Neve Designs’ custom input and output transformers. According to the company, this allows the 545 to “provide superb control and sonic performance without compromising the integrity of the source material.”

The price for the RMP-D8, an eight-channel remote control class-A mic preamp with Dante connectivity, has now officially been announced at $5,995.00 USD. It will also begin shipping in June 2018.