Why is this significant? Well, in the original heyday of analogue synthesis, there we two major companies making integrated circuits (ICs or chips) for the synth manufacturers. These were CEM (Curtis Electromusic Specialties) whose chips could be found in synths from Oberheim, Roland and more. Then there was SSM (Solid State Micro Technology for Music), founded by Dan Parks, whose chips were used in Rev 1 and Rev 2 Prophet-5s as well as Korg’s Mono/Poly and Polysix. 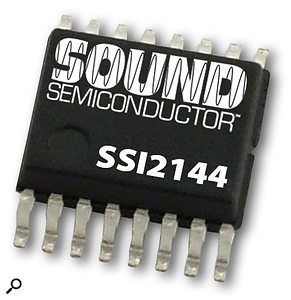 Dan Parks is now back and heading up Sound Semiconductor with the goal of developing affordable, high-performance ICs for electronic music and pro audio.

The SSI2144 is an updated and improved re-issue of the SSM2044, which found its way into the aforementioned Mono/Poly and Polysix, and which many believe to be the best-sounding filter IC ever produced. Both the original SSM2044 and new SSI2144 were designed by electronic music icon Dave Rossum.

As we’ve previously reported, the Prophet X fuses samples and synthesis into a single keyboard and is built around a bi-timbral stereo eight-voice DSP engine with a massive 150GB internal memory. The Prophet X provides samples created by sound designers 8DIO and also includes dual digital oscillators per voice with a wide range of waveforms.

Samples and waveform generation start in the digital domain but are passed through sixteen analogue filters. “Dave and his development team chose the newly available SSI2144 due to its classic ladder sound in an affordable and modern IC footprint”, say its makers.

"SSM chips were at the core of Rev One and Two Prophet 5’s," stated Dan Parks, President of Sound Semiconductor. "So it feels great to be back in a Prophet our the new SSI2144.”

Sound Semiconductor currently produce the SSI2144 voltage-controlled filter chip and the SSI2164 — a significantly improved direct replacement for the SSM2164 Quad VCA. More products are said to be in development.