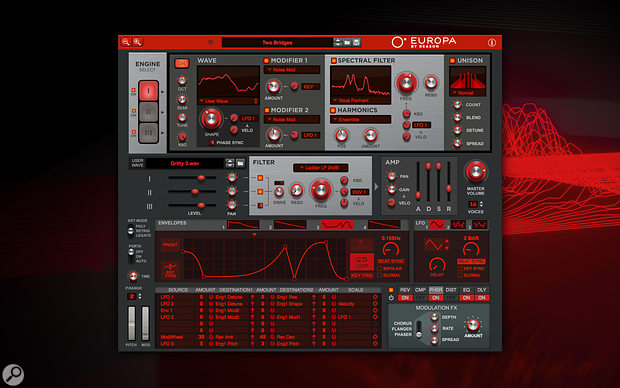 In what is a first for the company, Propellerhead Software have released Reason’s flagship Europa synthesizer as a standalone VST/AU plug-in and in web audio format. Europa is a spectral wavetable synthesizer using 30+ engine models and wavetables, 24 filter types, advanced modulation and powerful effects. The Europa plug-in and web version now bring these creative possibilities to even more musicians and producers.

“Having recently updated Europa with exciting new features like sample loading and advanced spectral processing, we’re now thrilled to make Reason’s flagship synth available to everyone,” said Ernst Nathorst-Böös, CEO of Propellerhead. “This marks the first time one of Reason’s devices has been made available as a plug-in for other digital audio workstations and on the web. Europa will allow even more music makers to quickly create exciting new sounds.”

The web version marks a true first, being a native web audio implementation of Propellerhead’s proprietary Rack Extension technology. Customers are now able to try out the Europa plugin on the web here.

Propellerhead are offering Europa for $99 USD / €99 EUR until June 30, 2018. Thereafter, Europa VST/AU will be available for download via the Propellerhead store or from authorised dealers for $149 USD / €149 EUR. All Reason 10 owners will get the Europa VST/AU plugin free, including those Reason users who upgrade from Reason 1-9 for $129 USD / €129 EUR.