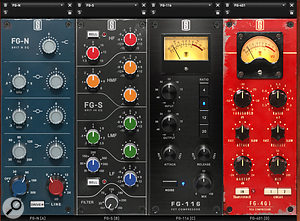 According to Slate Digital, their Virtual Mix Rack software (or VMR for short) is only weeks form completion and when it launches it will have the aggressively low price of only $149 for five modules.

Originally announced at the AES Convention in October 2013, the Virtual Mix Rack is a customisable virtual rack of mix processors — think 500-series in software form.

What's more, ahead of the VMR Mix Bundle release, Slate will be releasing the VMR for free with a free mixing and mastering module, details of which are yet to be announced. Once VMR Rack launches though, expect to see a lot more modules becoming available too.

Slate Digital have played up the CPU efficiency of their upcoming VMR Modules saying you will be able to run "TONS of them on your native machine without need for any additional DSP hardware." Thanks to 64-bit processing and proprietary oversampling techniques, the company also claim that VMR modules will have no latency in their processing making it possible to track through them with your DAW on low buffer with a roundtrip latency as little as 1.5ms.