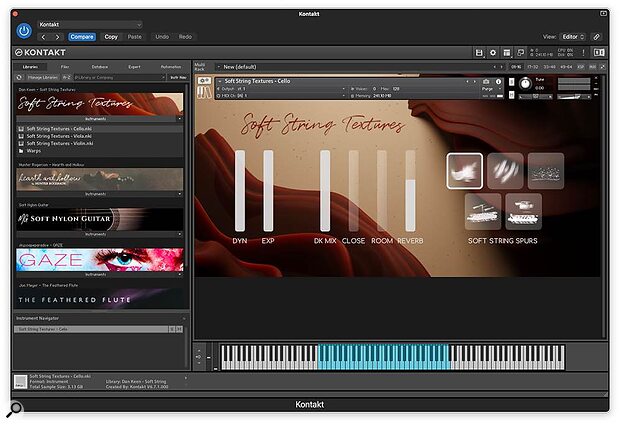 Pianobook have released Soft String Textures, a new sample library created by musician, composer, and producer Dan Keen. The library features violin, viola, and cello players, with each musician recorded separately to provide users with fine control over the resulting sound. Five articulations are included, and there are also a selection of Warped presets, which offer a range of hybrid sounds that have been created by combining multiple instances of samples with additional processing applied.

Soft String Textures has been recorded in Studio B at Spitfire Audio’s HQ using a total of eight microphones. The final samples are all provided at 24-bit / 48kHz, and the library boasts three dynamic layers along with two round robins. The available articulations include: Soft String Spurs (Long and Textured), Staggered Tremolo, Harmonic Whistles (Vibrato Harmonics), and Sporadic Trills (both Major 2nd and Minor 3rd variations). There are then a further 10 Warped presets, each employing a range of sample layering, effects processing, and panning to create new and interesting sounds.

“Formed of solo violin, viola and cello, Soft String Textures leans heavily on the musicality of our sublime players Ellie Consta, Georgie Davis and Meera Raja. Together, we have come up with something that I am deeply proud of”. - Dan Keen

Check out the video below for a detailed demonstration of the library’s sounds and features.

Soft String Textures runs within Native Instruments’ Kontakt or Kontakt Player (version 6.7 or above), which are supported on PCs running Windows 10 or 11, and Macs running macOS 10.15, 11, or 12. VST3, AU, and AAX plug-in formats are available, and the library requires 9.5GB of space.