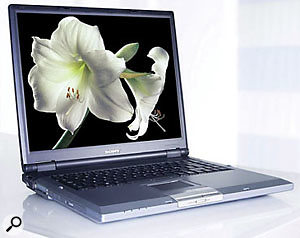 Sony’s VAIO computers are named in recognition of their multimedia aspirations — VAIO stands for ‘Video and Audio Integrated Operation’. The audio capabilities of the company’s two flagship PCs — the VAIO GRT notebook (pictured above) and VAIO RZ desktop machine — have recently been boosted with the inclusion of the Sonic Stage Mastering Studio software bundle, which enables users to record and process audio from their cassette or vinyl collections, for example, prior to burning to CD-R or archiving in a music library system. This bundle is not available separately from Sony’s machines; the software checks for specific code used in the Sony VAIO BIOS to prevent software piracy. 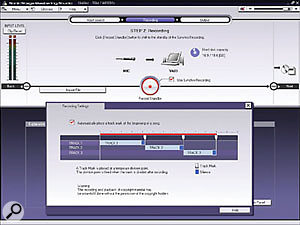 The user interface (shown above) has been designed to be simple and intuitive, with a logical three-stage process. The first step is to record audio into the computer, either via the analogue microphone or line sockets (where provided), or via a suitable USB audio interface. As part of the VAIO package, the Edirol UA5 USB interface can be supplied to enhance the system with two high-quality microphone inputs (with phantom power), DI, line and S/PDIF inputs, all at up to 24/96 resolution. The interface also provides stereo monitoring outputs in both analogue and digital formats.
Simple noise-reduction facilities are included in the software to deal with typical cassette hiss, vinyl crackle or mains-related hum, and basic editing tools allow tracks to be ‘topped and tailed’, reordered or discarded. There is no waveform display, but start and end points can be auditioned and adjusted in much the same way as they are on Minidisc. Automatic track division can also be performed based on an adjustable audio level threshold. The software includes facilities to set fade-in and fade-out times for each track, and it can even submit samples of each track to Mood Logic’s on-line track database automatically, to acquire the Artist and Track details for logging and labelling purposes (see www.moodlogic.com for more information on this). 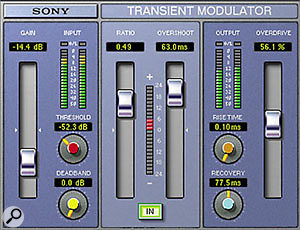 Four advanced mastering tools are included with the bundle — a slimline version of the Sony Oxford parametric equaliser (shown here) and three Waves plug-ins. Additional plug-ins are promised for future releases of Sonic Stage Mastering Studio. The basic equaliser is a three-band version of Sony’s Oxford EQ, but a five-band version which also includes high- and low-pass filters is also available as a download for a modest additional cost of about £30. The Waves plug-ins comprise the Renaissance Bass enhancer, S1 Stereo Imager, and L1 Ultramaximiser, all in their full versions but optimised to run within the Sonic Stage environment. All four plug-ins have associated parameter libraries providing presets for various music genres, and additional user presets can be stored.
After ‘mastering’, users can change word length and sample rate for burning the material to CD-R in Red Book format, or for archiving it within Sony’s Sonic Stage Jukebox media library system. Naturally, the algorithm used for performing the conversion is Sony’s own Super Bit Mapping process.
The Sonic Stage Mastering Studio is available from Sony VAIO dealers — to find the one nearest you, surf to: dealerlocator.sony.co.uk and select ‘Laptop and Desktop PCs’ from the drop-down menu in the centre of the page.
Sony have also produced a new plug-in in their Oxford range. Transient Modulator allows users to modify the transients of the selected programme material, to accentuate or softening the attack of instruments such as drums and increase or decrease the effects of ambience. This useful and versatile effect is presented in a simple and straightforward user interface with clear metering. The plug-in is compatible with Mac OS 9 and OS X, and TDM, RTAS and Audiosuite plug-in formats. The TDM version for Pro Tools HD and HD Accel costs £340, while the non-TDM version for Pro Tools LE systems costs £170. Sony are also now offering software bundles comprising their Oxford EQ, Dynamics and Inflator plug-ins for Pro Tools HD, Pro Tools LE and TC Powercore running under Windows or Mac OS. The Pro Tools HD bundle costs £1116.25, the Pro Tools LE bundle costs £528.75 and the TC Powercore bundle costs £705. All prices include VAT.
E support@sonyplugins.com
W www.sonyplugins.com
Previous storyNext story