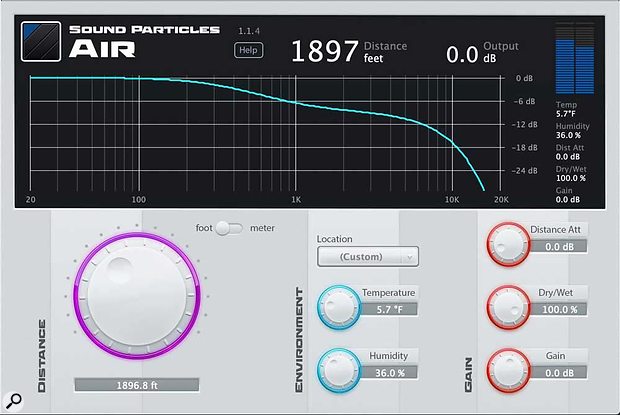 A well-known mixing tip for making sounds appear more distant is to roll a bit of top end off. This replicates the effect of something being physically further away, because air is surprisingly good at absorbing high frequencies.

Normally when we do this we're using a high-shelving filter, or a low-pass filter, in a standard EQ, but post-production software specialists Sound Particles have developed a plug-in specifically for the purpose of simulating airborne high-frequency loss, called Air.

What sets Air aside from other EQs is that, rather than telling the plug-in how much high end you want it to filter, in Air you tell it the distance, air temperature and even humidity that you want to replicate. It's also aimed primarily at audio-for-video, with Sound Particles recommending it especially for ADR.

Usefully for dubbing mixers who may have forgotten the absorption coefficients of air at different temperatures and humidities, Air includes a large collection of presets that should suffice in most situations. The list includes settings such as 'Death Valley in Summer', 'New York in Autumn', and so on.

This processor was previously available as part of Sound Particles' Doppler plug-in (another post-oriented plug-in designed to simulate the frequency shift that occurs when a sound source moves in relation to the listener), but Air makes it available as a stand-alone processor for static sources. It's available now, for just $55.