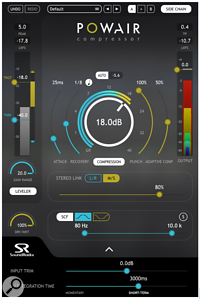 Sound Radix, the company behind plug-ins such as AutoAlign, Drum Leveler and Surfer EQ 2, is to unveil a brand new plug-in called Powair at AES 2017.

The Powair plugin is in their own words "a smarter, more natural sounding dynamic processor.”

Powair is a two-stage leveler/compressor plug-in designed to not only control dynamics but to bring a sense of power to vocals, instruments, and mixes. The first stage in Powair is a k-weighted perceived loudness (LKFS) auto-leveler. Whether you need to deliver tracks to EBU specifications or control the levels of a dynamic performance, the loudness leveler will smoothly ride your tracks and get them to your target level, claim Sound Radix.

Powair uses an innovative gain detection and reduction engine that its makers say is capable of "fast gain changes with minimal distortion and adaptive response to the recorded source signal.”

Ultimately, Sound Radix’s aim with Powair was to allow powerful dynamics shaping while maintaining the timbre of the source, even when pushed to extremes. In a bid to preserve transients, Powair sports a ‘Punch' feature which enables full control over the transients levels during the Attack stage; making it possible to shape transient length while keeping peak levels under control.

And in an industry first, Powair features so-called 'Adaptive Compression’, the idea of which is to let you set a compression level that you like for a verse vocal, for instance, and have it maintain that character when hitting a louder section without over-compressing.

We will bring you a demo from the upcoming AES convention in New York in the coming days.