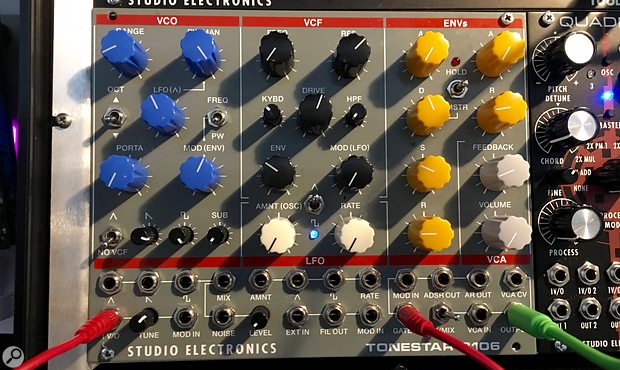 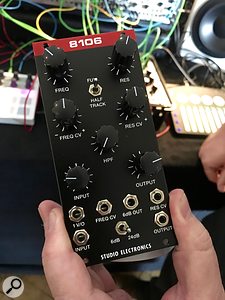 Studio Electronics have been on the modular scene for quite some time and have also made a name for themselves with the popular desktop Boomstar synths. Being demoed at Superbooth, though, was their new Tonestar 8106 Eurorack synth. The Tonestar 8106 is based around the classic Juno/JP filter but created with discrete components rather than a 1980s chip. This makes for a greater dynamic range and improved frequency response, say its makers. It's already getting rave reviews from those who have heard it. Hear it on the Sound On Sound Instagram. The Tonestar 8106 costs £499.

Studio Electronics are also offering a Tonestar-based mini system in a rugged Synthrotek case with the toolbar 1U expansion and with an optional Quadnic module.

Also, fresh out of the box as we arrived on their booth today were the 8106 Filter module, again based on the JP/JU, but with an additional overdrive input.

The Slimo compact VCO module was also on show . A smaller version of Studio Electronics' 'Oscillations' module, as used in the Tonestar.