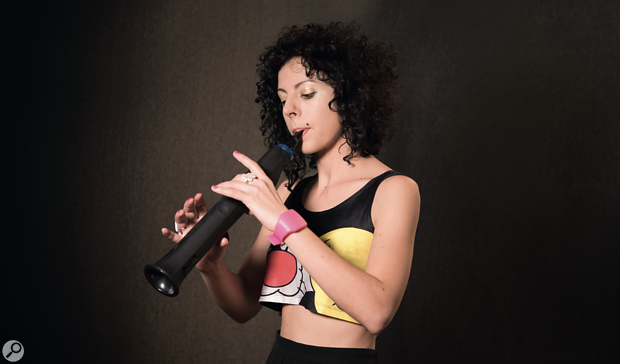 Innovative French musical instrument designers Aodyo introduced their first electronic wind controller, the Sylpho, back in 2015. What set it apart from other designs, such as Akai’s EWI, was the fact that it actually passed air, rather than just sensing pressure applied. The whole idea of the Sylphyo was to bring traditional playing techniques to the world of electronics and to that end, Aodyo claim that their developments provide a more natural playing experience.

Now, the team have made two new developments. Firstly, the Sylphyo now has built-in sounds and a headphone output, making it possible to play the electronic wind instrument anywhere. Secondly, they've released a wireless receiver box with built-in sounds and extra connectivity called Link. This greatly expands the potential of the Sylphyo. The Link has an internal sound engine with patches specifically designed to harness the potential of the Sylphyo as an instrument. In real terms, this means sounds that react well to breath control, as with traditional wind instruments. Currently on offer there are seven "sonic universes” as described by Aodyo, but the developers say that more are on the way. The current sounds are not completely editable yet but that is due to change in the near future. 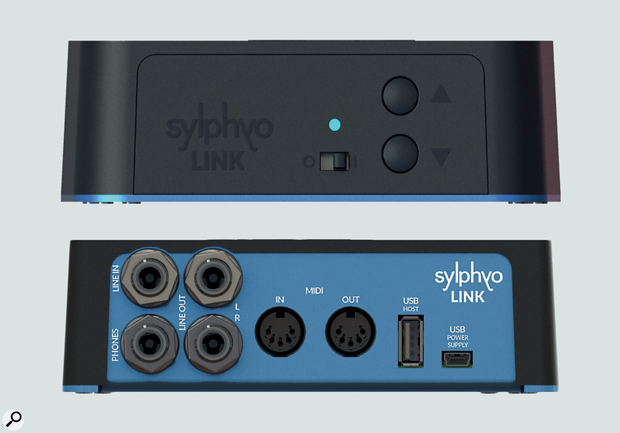 The Aodyo Sylphyo Link turns the wireless electronic wind controller into a standalone instrument with built-in sounds and audio output.

The wireless Link device sports a headphone output for practice/monitoring but also has line outputs letting you sit it out of the way, connected to a PA while you perform on stage. A line input gives you the ability to play along to backing tracks while MIDI I/O lets you play the Link’s sounds from a second external MIDI controller, or play hardware synths, for example, with the Sylphyo.

In addition, the Sylphyo hardware itself has received some additional improvements: it now turns on much more quickly (in less than half a second), uses new and improved breath filtering tech and it can also be plugged directly into your computer as a USB-MIDI controller.

The Sylphyo and Link can be purchased as a bundle for €999. If you don’t need wireless connectivity, you can buy the Sylphyo on its own for €799. The Link receiver/sound engine can be bought separately for €299. Accessories and colour options are also available.