Published 15/3/18
A compilation of nine tracks from artists working with Modular Synths. 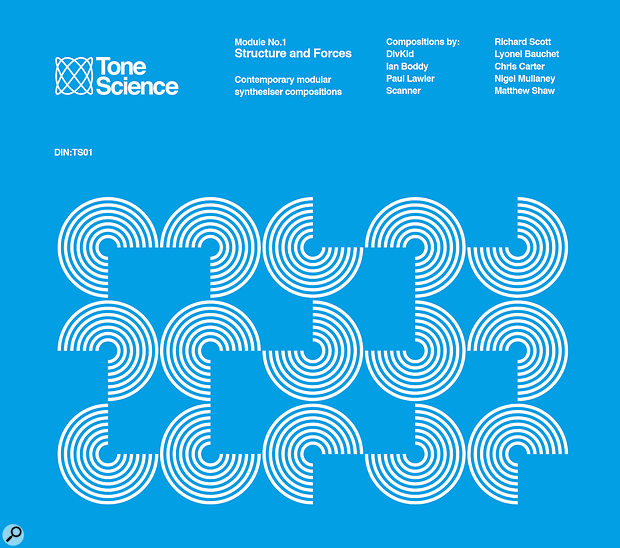 Inspired by his own “Tone Science” 2016 album release, musician and DiN label owner Ian Boddy has set up a sub-label to feature artists and performers working in the field of modular synthesis. The first release “Module No.1 Structure and Forces” is a compilation album featuring nine artists from different musical backgrounds with the common thread being that all the tracks were composed entirely with a modular synth system.

The album opens and closes with the ambient soundscapes of two tracks by DivKid and Matthew Shaw who run the well respected Modular Podcast. Boddy himself follows the opening track with an extension to his original “Tone Science” album with another aleatoric self playing composition in “Tone 6”. Paul Lawler and Nigel Mullaney are both heavily involved in library music and soundtrack composition and their two multi-layered compositions showcase the cinematic possibilities of the modular synth world.
The remaining four tracks are more rhythmic in nature with the beautiful ambient washes of “If Wishes Came True” by Scanner leading into the hypnotic ostinato patterns of “Ghatam” by Richard Scott. French Buchla wizard Lyonel Bauchet ramps up the intensity with an elegantly constructed pulsing track before Chris Carter (Throbbing Gristle) ends the rhythmic proceedings with the grimy, dubby bass powered “Frieze Relief”.

Boddy has curated both the artists and tracks on this album to flow in a musical way and not just be a collection of equipment heavy demos. Though fascinating and always cool to look at, it is important not to get lost in the gear for gears sake syndrome. Having said that this album features Eurorack, Serge, Buchla & Hordijk modular systems and the nine tracks show how varied and flexible these instruments can be.

“Tone Science Module No.1 Structure and Forces” is just the first of what Boddy intends to be a series of releases on this new sub-label featuring artists and musicians working in this ever fascinating and varied musical field.