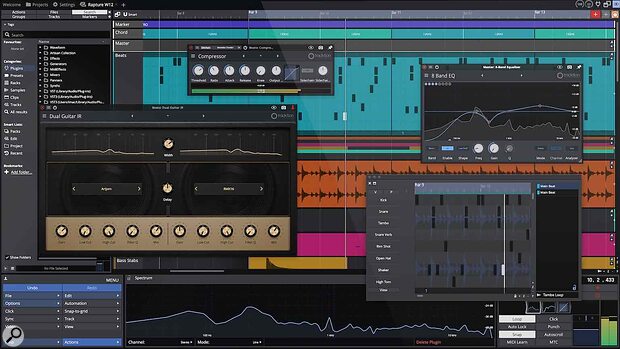 Tracktion have released Waveform 12, a major update to their innovative DAW software. Version 12 sees the DAW gain a whole host of new features including a refreshed user interface, new audio and MIDI functionality, refreshed audio plug-ins, and a rewritten audio engine that improves CPU performance and reduces the load of a typical project by around 25%.

New dark and light colour schemes are available, with further adjustment provided by a customisable colour editor. Users can choose from over 20 included colour presets, or create and save their own. The Actions and Properties panels have now been combined into a single panel in order to save screen space, whilst the Browser has been completely overhauled with a new categorisation system that allows users to search by Plugins, Presets, Racks, Samples, Clips, Tracks or All. In response to requests from users, Tracktion have also added a dedicated master track to both the arrange and mix windows, and the master plug-in cap has been raised to allow simultaneous use of up to 16 plug-ins.

A brand new instrument, BassOSC, designed to create sub-bass parts has been added, and built-in cabinet simulation is provided courtesy of Guitar/Dual Guitar IR plug-ins. Waveform’s entire collection of stock plug-ins has also been refreshed, with performance, functionality and visual appearance all seeing an improvement. On top of this, six entirely new utility plug-ins have been introduced, including an A/B Switch, a Convert to Mono tool, a Mid/Side Splitter, Spectrum Analyser as well as MIDI CC and MIDI Note Name tools which create note names for any 3rd party instrument.

MIDI editing gains a range of new features, including a Notes in Key mode that hides notes outside of the selected key from the Piano Roll, and a Notes in Use mode that will display only the notes that have been used in a part. A MIDI Randomisation function helps to create expressive parts by varying velocity, pitch, note start and note length values whilst updating the data in real time, allowing users to monitor the results before committing.

Audio editing has not been left out, with a new Strip Silence function allowing users to automate the process of removing gaps in audio takes and also set adjustable fade in and out times for the resulting edits.

Waveform is compatible with macOS 10.11 or later, Windows 8 and Windows 10, and Linux compatibility has also been tested on Ubuntu 18.04.

Waveform Pro 12 is out now, costing $149, with bundles including other Tracktion software and add-ons also available through Tracktion’s website.