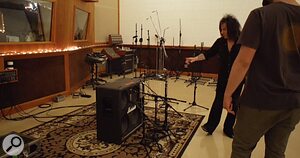 The cabinets were captured at Studio 606 using Two notes' DynIR impulse response technology.All of the impulse responses have been captured at Studio 606 in San Fernando Valley, through the legendary Neve 8028 recording console originating from Sound City. The cabinets in question include a Scumback Purple Raygun, a Marshall Basketweave 4x12 loaded with vintage Celestion V30s, and the same 1980s Marshall 4x12 used on the Top Gun anthem and Michael Jackson’s Dirty Dianna.

Customers who purchase the collection are eligible for a free full lifetime licence of Two notes’ Torpedo Wall of Sound software. The collection can also be used within Torpedo hardware products (Captor X, C.A.B. M+) via the Torpedo Remote Desktop and Mobile applications. It is also capable of running within third-party products from Revv, Victory Amplification and many more. More information on the collection can be found on the Two notes website.

Steve Stevens is considered to be one of the most original guitarists to emerge from the 80s rock scene. A longtime collaborator with Billy Idol (co-writing hits such as 'Rebel Yell', 'Eyes Without A Face' and 'Flesh For Fantasy'), Stevens’ playing techniques and guitar tones have earned him legendary status. His inaugural Two notes release brings his tone-bending knowhow and collection of rare and classic cabs to guitarists worldwide.

The Steve Stevens Platinum Collection is available now from the Two notes store for $39€39, with individual cabinets available for $10€10 each.