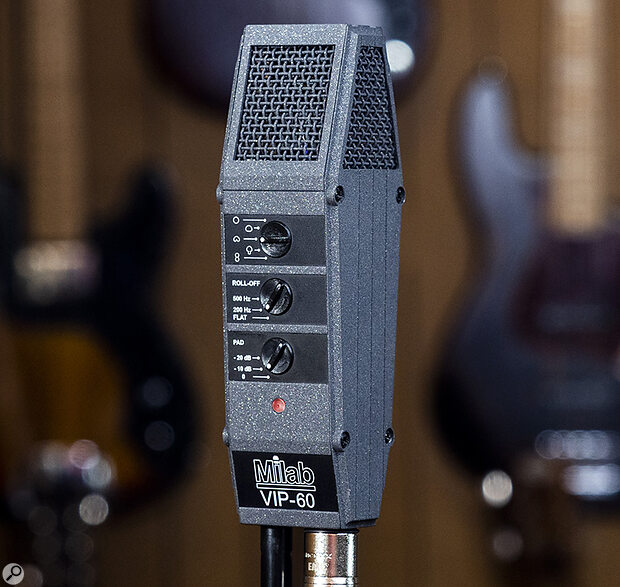 In the annals of European microphone history, Swedish brand Milab probably don't get the recognition they deserve. Remarkably, Milab's roots date all the way back to the 1930s, but it's for their 1987 release, the VIP-50, that they're best known.

The VIP-50's most distinctive feature was its rectangular capsule. Unlike round capsules, which have a single and pronounced diaphragm resonance relating to their diameter, rectangular capsules have two much less prominent resonances, which tends to manifest in a very clean, uncoloured sound. Perhaps even more significantly, rectangular capsules also exhibit an asymmetrical pickup pattern, which can be put to effective use in negating spill, or focusing on the desirable qualities in an instrument while minimising pickup of less pleasant aspects.

Those are just some of the reasons the VIP-50 has found itself the vocal mic of choice by such high-profile engineers as Bruce Swedien, Richard Perry and Gary Lux, and appearing on records by Michael Jackson, Jeff Buckley, Ray Charles, Tori Amos and countless others.

Now, 37 years after it was first introduced, Milab have released a follow-up, the VIP-60, which they say brings the sound of the VIP-50 “into the 21st Century”.

Following an 18-month R&D process, the VIP-60 employs a revised (but still rectangular!) diaphragm design, and improved circuitry, all adding up to what Milab say maintains the 'Milab sound' while improving technical performance, most notably a reduction in self-noise.

Like the VIP-50, the new VIP-60 offers a choice of five different polar patterns, two pad options -10 or -20 dB), and two high-pass filter settings (200 or 500 Hz). It ships with a waterproof SKB case and a purpose-made Rycote shockmount, and is priced around £2000, subject to currency fluctuations. We'll be bringing you an in-depth review in an upcoming issue of Sound On Sound.