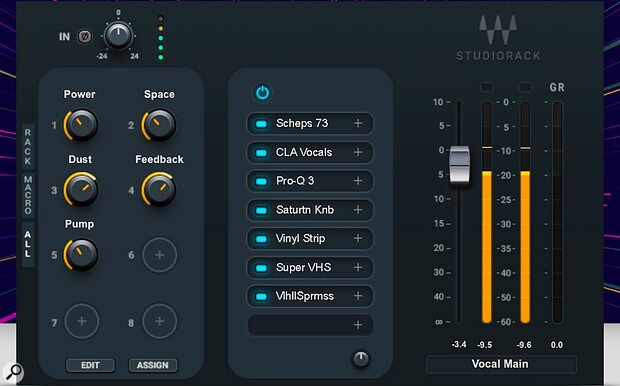 Waves have announced that their StudioRack plug-in is now able to host VST3 plug-ins from any manufacturer, allowing users to create, save and load complete processing chains consisting of plug-ins from Waves and any other brand.

StudioRack allows users to build chains of up to eight plug-ins using a single DAW insert, and save them for instant recall. Multiple parameters from different plug-ins can be assigned to a set of macro controls, essentially allowing the creation of custom plug-ins, and there are also a number of internal routing options that allow parallel and mid-side processing from any point in the chain, all within the StudioRack plug-in itself. A multi-band split feature allows any loaded plug-in to be used as a multi-band processor, with detailed control over crossover points.

Once chains have been created, they can be saved along with StudioRacks’ internal routing settings, and be opened instantly in any DAW, allowing for easy collaboration between users of different DAW software. Another useful feature is that the ability to host VST3 plug-ins makes it possible to use StudioRacks to load those plug-ins in DAWs that do not support the format, such as Logic Pro X or Pro Tools.