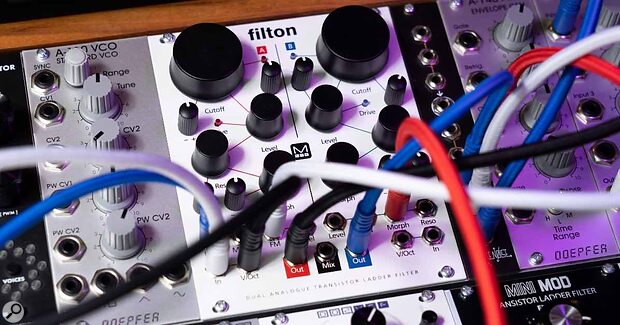 Modal Electronics have announced Filton, an analogue 4-pole transistor ladder filter Eurorack module, that will be available for a limited time only as an exclusive Kickstarter project. Featuring a transistor drive circuit that covers everything from subtle saturation to thick overdriven textures, Modal Electronics say that the Filton will deliver exactly what demanding sound designers and musicians want from a modern reincarnation of the classic filter concept. 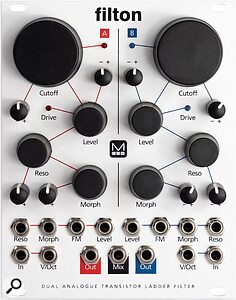 The 20HP module is equipped with two discreet filter signal paths that can be used independently or in a stereo mode, and the device is capable of providing both individual and summed mono outputs. The circuitry has been inherited from Modal’s 002 synthesizer, and plenty of versatility is on hand thanks to a Morph controls which allows users to transition seamlessly from a 4-pole 24dB/octave low-pass, though a band-pass, to a 1-pole 6dB/octave high-pass filter.

The module’s symmetrical layout provides dedicated Cutoff, Resonance, Morph and Level controls for both filters, and each filter is equipped with two analogue FM CV inputs, one featuring 1V/octave pitch tracking and one exponential with a bipolar attenuvertor.

Filton will be available for a limited time exclusively as part of a Kickstarter project. A pledge of £299 will secure a Filton upon its release, whilst pledges of £575 for two modules and £825 for three modules are available for those wishing to buy in groups, or have multiple Filtons for themselves! Lower pledges are available with limited edition t-shirts up for grabs (£19 and £35), as well as a £10 option for those simply wishing to show their support.

Click here to go to the Filton Kickstarter page.