Remix FX brings together many of the real‑time audio processing tools available in Logic under a new streamlined single interface.

The beauty of Remix FX is that more than one effect parameter can be controlled simultaneously. It features two Grids, and allows the values of two parameters per Grid to be changed by sweeping the mouse around. If you click on the name of the effect at the top of each Grid, you’ll see the types of processing Remix FX offers. 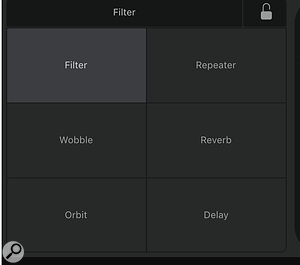 Remix FX offers a choice of six different real‑time processors.It’s probably a good idea at this point to click on the faders button in the centre of the plug‑in to reveal the extra parameters for each effect. Let’s take the filter as an example. Two ‘types’ are available. Classic is a state‑variable filter with a slope of 12dB/octave, and the warmer Phat offers 24dB/octave low‑pass and high‑pass filtering. Both sound really nice, and you can adjust both Resonance and Cutoff controls at the same time. I’ve used this a lot to add interest to plug‑in synthesizers and drum loops — I mean, who doesn’t love a filter sweep?

The Wobble effects runs the audio through a ‘vintage’ filter too, but it’s the modulation rate and depth that the two axes control, creating an auto‑wah‑type effect, while the Time buttons set the Grid (note division, note division with an added triplet, or a triplet of the note division). I had a lot of fun with this and the Delay together, emulating the kinds of synthesizer sounds that Tim Blake of Gong used to make — but with Remix FX you’re not limited to oscillators as your source, as you can process anything from a single track to a complete mix.

‘But wait!’ I hear you cry. I only have two Grids on screen and a single mouse. What if I want to use all of the effects at the same time? Well, you could just open several instances of the plug‑in on a Track (Remix FX is admirably light on the CPU), but as all the parameters are also automatable, you can capture your ‘performance’ for further editing. Just put your track into an automation write mode, press A to display your curves, and mouse away.

Murder On The Dancefloor 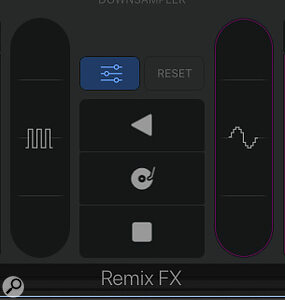 The DJ section provides convincing turntable‑style effects.In the centre of the plug‑in are more DJ‑friendly controls. Clicking on each will bring up any associated parameters at the top of the plug‑in window. The little square waveform fader is the Gater, and sliding this up and down does what it says on the tin: it adds a gating effect to the audio, while variable note divisions define the length of the effect. The noise button adds a bit of, well, noise. I’ve not found a use for this yet, but I suspect someone will! The more sine‑y looking waveform icon is a downsampler control: the higher up the screen you go, the lower the sample rate (not ‘resolution’ as Apple would have it). When the Extreme button is pressed, the audio, to me, sounds a bit like the tone you get using a ‘telephone’ filter. I found this mode very satisfying and not extreme at all.

The backward play button reverses the audio. If you click to either side of the icon, you’ll see that two square areas become visible. If you choose these and then a Reverse time from the top of the Remix FX window, you can programme in two time choices for the effect. The record‑player icon underneath also features two programmable time slots that you can set to define the type of digital ‘scratching’ you want. This method of performance reproduces vinyl manipulation extremely well without all that tedious mucking about with records and replacing worn‑out Stanton cartridges. The final icon delivers an audio ‘brake’ feature. The duration of the slowdown can also be preset into the two selection boxes. You can freeze effects using the little padlock icons or Reset the plug‑in from the eponymous button.

Experimental musicians will love the real‑time control, while subtle use of the more ‘traditional’ effects can bring a dull lead line or drum loop to life.

None of this functionality would be worth a hill of beans if Remix FX didn’t sound any good — but it really does! Apple say that this new tool brings ‘DJ‑style effects’ to Logic Pro X but, like all of this DAW’s new performance tools, it’s capable of so much more. Experimental musicians will love the real‑time control, while subtle use of the more ‘traditional’ effects can bring a dull lead line or drum loop to life. Add in a hardware controller, and you have a real‑time effects unit that is going to be really useful in both the studio and on stage.

Who doesn’t like a joystick? Ever since Brian Eno twiddled his on an EMS VCS3 on Top Of The Pops in 1972, many of us have incorporated X/Y manipulation into our music, either through standalone effects devices like Korg’s Kaoss Pad or dedicated MIDI pads or joysticks. Remix FX is almost crying out to be unleashed from the limitations of the single mouse swipe, and the easiest way to play with several of the plug‑in’s parameters at the same time is to use Logic Pro’s free Logic Remote app for iPad or iPhone — Remix FX is the tool that this application was born for. 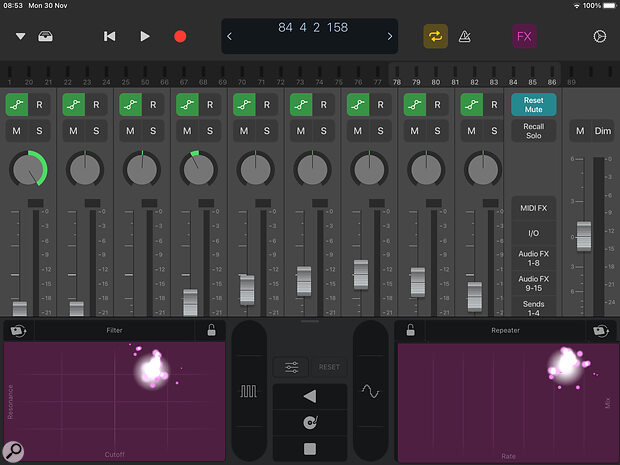 The Logic Remote app lets you manipulate both X‑Y grids at the same time.

Remix FX appears on the Remote screen just as it does on the Mac — only now you can ‘play’ with both Grids at once and use several of the DJ tools at the same time. For those of us without one of Apple’s touchscreen devices, you can use something like Audioswift (www.audioswiftapp.com) to convert a laptop or standalone multitouch pad into a Mackie Control‑compatible MIDI controller with X/Y capability. Audioswift allows you to create Zones on your touchpad, so you can play with both Grids and other controls simultaneously. I found it quite fiddly to set up, but once running (and with a bit of muscle memory) it produced results similar to using a touchscreen.

The free Audioswift software lets you use a laptop or standalone trackpad as an X‑Y pad.

You can also, of course, utilise one (or many!) hardware MIDI controllers with X/Y control capability. The Joué Board modules (reviewed in SOS May 2019) would be ideal for this application, but even something like a Korg Nanopad 2 (or several!) would enable you to create a hands‑on interface for Remix FX. Setting up MIDI hardware control for Remix FX isn’t quite as simple as for most of Logic Pro’s other controls. For the Grids, Downsampler and Gater, you’ll need to assign a parameter for the effect first — this is what automatically happens when you click your mouse to ‘play’ the effects. We need to assign a button for switching the effect on and off and then assign our hardware X/Y pad and faders to control the parameters of the effect itself. As you can’t define manually which on‑screen control is assigned to which hardware controller, the easiest way to implement this is to use the Smart Controls feature.

Press B to open the Smart Controls window. Click on Automatic Smart Controls and choose the preset Modern Black Tab 2 from the Factory Layout menu — this offers two banks of 12 assignable knobs (Controls and Sends) along with 24 buttons. Press the little radio button to open the Smart Controls Inspector and click on an on‑screen button. From the pull‑down menu situated under the track name, select a Remix FX effect On/Off parameter to assign to this button. Next, click on Learn in the External Assignment section and press the hardware button you want to use to turn the effect on and off. Click Learn again to turn it off. This will set up a momentary toggle; if you want to set up separate presses for on and off, press Cmd+K to open the Expert View controller assignments window, select an On/Off parameter and change the Value Mode to Rotate.

You can also assign all of the ‘extra’ parameters in Remix FX to hardware buttons in a similar fashion. Next, we’ll need to assign the parameters for that effect. Select a knob, choose the Remix FX parameter you want to control, and use Learn to assign a physical knob. Repeat this for all the Grid and fader parameters (and remember that an X/Y MIDI controller will require two assignments). It’s a fiddly process, but once it’s set up, you’ll have full control of the horizontal and vertical parameters of Remix FX.