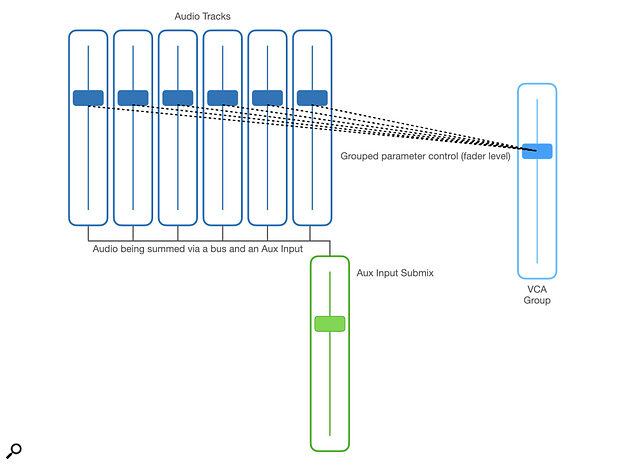 Screen 1: The green fader works like a group fader on a traditional analogue mixer, controlling the levels of all the channels that are being fed through it. The light blue fader on the right is a VCA fader: it doesn’t actually pass audio, it simply tells the faders within the group what level they should be. For simple setups they work identically, but as things get more complex the comparison falls apart.

We explore Bus and Group compression.

While there are undoubtably far more people using Pro Tools today who have never used an analogue mixer than there were when I came to the platform over 20 years ago, those devices still cast a long shadow over their software equivalents. One assumption I was quick to make when coming to Pro Tools was that a Group in Pro Tools was the same as a group on the hardware mixers I was used to. The comparison was entirely inappropriate: the only thing they share is a name!

The distinction is between a set of tracks which can be controlled as one without their outputs being summed (a Mix Group in Pro Tools) and a submix of tracks being controlled by a fader at the summing point (a group as I understood it from analogue mixing consoles).

Screen 1, above, shows how the two processes differ. Although the two approaches are similar, and in the simplest examples behave identically, as complexity grows they yield different results. There are many practical reasons why you might choose one over the other but the area I’m going to concentrate on here is the difference it can make to processing — particularly compression.

Pretty much everyone who mixes audio loves zooming in on the minutiae of the differences between the effects of different compressors, and something which merits close examination is the difference that dynamic processing has depending on where it is in the mixer topology and exactly what is driving the detector of that compressor. The choice when controlling the dynamics of a group of related tracks is between processing them individually or together. Unlike many processes this makes a significant difference to the end result. The ubiquitous use of a bus compressor on the output of a DAW exploits this difference, as compressing a summed group of signals inevitably means that a loud peak on one instrument causes the level of the entire track to be affected. This effect is commonly referred to as ‘glue’. I’m not a fan of the word and prefer to talk about an ‘interdependence’ between the tracks, which when done well causes a pleasing movement within the track.

If you want to experiment with this more widely then definitely try using a compressor which isn’t stereo linked. Linking the side‑chain detectors of a stereo compressor means that each side of the compressor is driven by a summed, mono version of the stereo input. This is desirable as it means that a loud peak on one channel won’t cause an imbalance between the left and right channels, which would cause the stereo image to move. However, if you want to introduce movement within the track when using bus compression then why not embrace the variation a little stereo movement can introduce? Some compressor plug‑ins allow a variable stereo linking, FabFilter’s Pro C2 being an excellent example, however in Pro Tools a stock compressor plug‑in can be run unlinked by instantiating a multimono version.

To illustrate the effect of unlinking the two sides of a stereo compressor, try the following experiment:

You’ll hear the difference straight away. The steady sine wave of the signal generator is no longer being modulated by the click because the multimono instance is two independent compressors with no stereo linking, and therefore no interdependence between the channels. 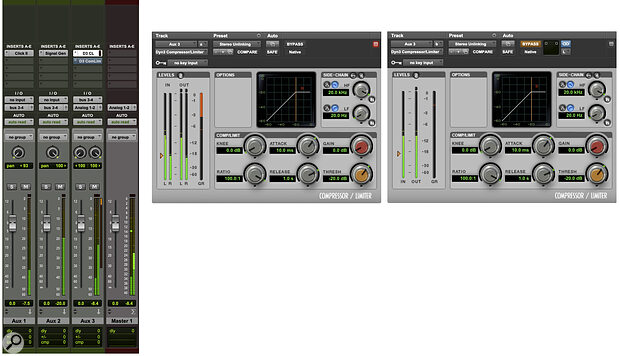 Screen 2: A simple setup that clearly demonstrates the difference between using linked and unlinked compression on a stereo source.

This is a very artificial example. It’s probably a little difficult to listen to too, so you might consider at least dropping the frequency of the sine wave, but building an example using a kick drum and a pad might be an easier listen! To hear a more real‑world representation of what happens when you unlink compressors try panning in the mono auxes to 50 percent left and right respectively. You’ll hear how the effect lessens, but if you apply the same processing to a typical mix, particularly if the side‑chain is high‑pass filtered to reduce the influence to the kick and bass, you’ll see how information on one side of the stereo image can cause the other side of the mix to ‘bloom’ in response.

How does this relate to Pro Tools Groups? Well, in the same way as we have a choice between having the predictable behaviour of a stereo‑linked compressor, or the less predictable but possibly more interesting response of an unlinked compressor, when compressing a group of related tracks the choice is between compressing them all at source independently or routing them all through a submix on an aux input or a routing folder, and using a single compressor across them all.

Which you choose should be a decision based purely on the sonic result. On a group of guitars or a stack of backing vocals I’ll typically compress them all together at the bus because of the aforementioned interdependence, which can blend them into a cohesive whole. However if I want to control them more forensically I’ll instantiate compressors across all of them individually. This isn’t an either/or choice and it’s common to use both. However I’d be the first to admit that, as often as not, I’ll favour the bus compressor over any individual compressors as it is just so much more convenient to adjust one control instead of many.

The grouping of plug‑in parameters sounds like the ideal halfway house between bus compression and individual compressors...

This is where Pro Tools Groups come in. As well as controlling faders, pans and mutes, it’s also possible to link plug‑in parameters. I...simply untick Follow Globals and, in the Attributes tab (Screen 3), tick the Controls and Bypass options for the insert slot you have used for your compressors. (Note: it’s important to have the compressors on the same slot in all the member tracks if you want to link their controls.) Now in the same way as you might push harder into the compression for all your backing vocals at the bus compressor by lowering a single threshold control, you can do the same on all of the compressors at the same time by adjusting the threshold of any of your grouped compressors. 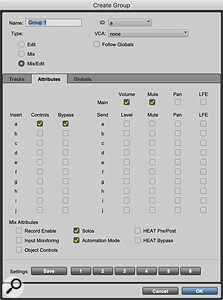 Screen 3: The Attributes tab of the Group setup page lets you link plug‑in controls across a number of different tracks.In theory this sounds fine but in practice you’ll soon find yourself wanting to swap between the grouped and ungrouped behaviour as you find you want slightly different thresholds for each of the member tracks. Using the Suspend All Groups command (Shift+Command+G, or Shift+Control+G on a PC) has always struck me as heavy handed; I prefer to put Command Focus to the Groups list (the little a‑z button in the top‑right of the Groups sidebar) and to toggle Groups on and off using the Group’s ID letter. This is made much easier if you assign memorable ID letters to your Groups when you create them, like D for drums, G for guitars, and so on. A better way still is to use Control (or Start on a PC) to temporarily suspend the grouped parameter linking. This works with faders, pans, and also plug‑in parameters.

The grouping of plug‑in parameters sounds like the ideal halfway house between bus compression and individual compressors, offering the ease of use of a bus compressor but without the interdependence. There is an issue which hamstrings this technique, however, and it’s important to be aware of.

When mixer parameters are grouped and the same parameter is at different levels on different tracks, the offset between tracks is preserved. So, if a fader or pan is different on one of a group of tracks, when grouped this difference will be preserved. Unfortunately this isn’t the case for plug‑in parameters, so if you were to offset a compressor threshold on one track, when the group is re‑enabled all the thresholds will jump to the value of the next threshold control you move — which can be very annoying!

The best solution is to make sure you set your global ‘grouped’ setting first and then offset individual tracks. But if you want to make a change using grouped behaviour, realise you’ll lose your tweaks. Not ideal but good to be aware of, as you can’t undo you way out of parameter tweaks.