Finneas O'Connell: Producing When We All Fall Asleep, Where Do We Go? By Paul Tingen

To illustrate the dark themes of many of their songs, and enhance their austere productions, Finneas often adds self-recorded Foley sounds, as well as stark vocal effects. Before he can apply the latter, though, elaborate editing is required to make the vocals sound 'right' in the traditional sense. "The hardest thing I have to do with each song is to cut the background noise. Billie sings so quietly that I have to go in with every vocal take we use, and crossfade into silence between every word she sings, otherwise there'd be a noise floor behind the vocal. If I ever have an assistant, I'll make him or her do that! Live this also is an issue, so we have no monitors on stage, and the drummer has plastic shields in front of him, which means that the stage is very quiet. It still is a constant war for our front of house engineer to get Billie's voice to sound loud enough, and not have feedback! 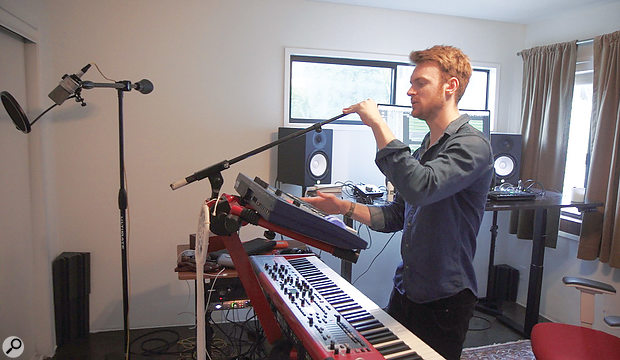 Finneas' current studio might no longer be in a bedroom, but it's still minimalist!

"As for the vocal effects, I use different things. I use the Logic compressor, and Logic's Vocal Transformer, Pitch Correction and Sample Delay plug-ins, Antares' Harmony Engine, and often Soundtoys' Little AlterBoy. We also started experimenting with Antares Auto‑Tune. The song 'Listen Before I Go' has Auto‑Tune, and some of the vocals on 'Bury A Friend' as well, but it's a very strong effect, like Kanye/T-Pain-type Auto‑Tune. I don't ever tune her vocals as a fix. If she's sings a note that's a little bit off, I don't correct it.

"I might have said to Rob [Kinelski] at one point that we don't want to use any reverb on the album, and we definitely kept some vocals really dry. But not all the time. For example, there's some reverb on the song 'I Love You' and 'Listen Before I Go'. Pretty much every reverb that I use is by Valhalla — the Room, Plate, Shimmer — I love these plug-ins. But I use reverbs in very specific places, and the rest of the album is dry. That dryness is all about intimacy. A dry vocal sounds really intimate: it makes it sound as if she's singing right in front of you, and I think that's really exciting. So it was a very conscious decision.

"Pretty much everything we do is very deliberate. I wish we had more happy accidents, but whatever we do, we'll try something else, to see which is better. At the same time, I try never to limit my approach in any way. I try to do different stuff each time. If I have done a song that's really dry, the next song will have lots of reverbs. My work always is like a pendulum. While working on a song, Billie and I will be adding things, and the moment the things we add don't make the songs better, we know the song is probably done. As long as the song keeps getting better when you add things, we keep going.

"I do spend time on rough mixes, because I don't expect mixers to fix what I am doing. So I am not ever lazy about that. It's not the mixer's job to fix productions. Mixers are not there to make creative decisions, they are there to make sure everything fits together correctly and is balanced and sounds good on every system. Having said that, something that's really fun is that Rob will sometimes come up with ideas, like the little vocal stutter at the end of 'Bad Guy'. He put it in, and we went, 'That sounds great!'"

When asked how he retains objectivity as the solo producer of an album made with a family member in family surroundings, Finneas replies, "We make music every day that we're really passionate about, and that's crucial. You have to be super-passionate about what you do. We're really lucky to have a label and management who simply let us do whatever kind of music we want to make, but before I send things to Rob for mixing, I'll send it to our manager, Danny Rukasin, and the head of Billie's label, Justin Lubliner, and our A&R, Sam Riback, and they may have notes or ideas. I always try their suggestions, even if I don't like them, so they can hear why they don't work! Our parents also have strong opinions, but they respect our creative place and don't try to change our minds or influence us too much.

"We made exactly the album that we wanted to make, and we knew that whatever would happen, we would not regret making something that we were proud of. But for me it is crazy that so many people are enjoying it. I figured that if our album would not get good reviews, that'd be fine, because many of the albums that are my favourites and that are really important to me did not get very good reviews. So the fact that the album did get good reviews was totally shocking for me. I feel really lucky, and also really grateful that people like the album. It makes me want to make more music!"

Asleep On The Road 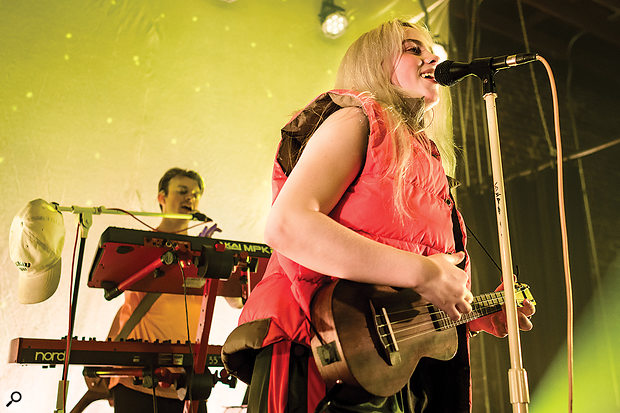 With When We All Fall Asleep, Where Do We Go? a number one in many countries (it made Billie Eilish the youngest-ever female artist to top the UK charts), Eilish and Finneas O'Connell have embarked on the When We Fall Asleep world tour, which has so far seen them visit, in addition to the US, New Zealand, Australia, Canada and the UK, and will see them all over Europe in August, with more dates still being added. According to Finneas, they work with a playback tech live, who has two laptops to play backing tracks from (one for backup), while Finneas plays guitars, bass, and his Nord Lead 3, linked to two computers (again, one for backup).

"We decided that I play everything that is fun to watch live, and the stuff that might be kind of boring to watch remains in the backing tracks. But my productions are so minimalist, that there is not a lot of stuff that is not being played live. We are actually playing 90 percent of the stuff! It is a lot of touring, but it is fun. We're now playing spaces that are big enough to allow us to set my studio gear up in the green room. It's just a couple of speakers and a microphone and stand and a keyboard. It means that I can record every day while we are on tour, which is really satisfying."

Despite having worked as an actor, Finneas O'Connell is slightly surprised by hearing the sound effects in his productions described as Foley effects. "Calling it Foley is a good way of putting it! It is indeed like when you watch a movie you hear all these sounds in the room, and I like to make songs sound like they are scenes in a movie. Does this come from my acting background? That's a cool idea, but I don't think the two are necessarily linked, though I love telling stories, and I love painting pictures. For me, visual art and music are the same thing. It's the same with Billie. She puts as much energy and effort into the cover art for her album as into her actual songs. All these things are really important, and nothing is an afterthought.

"We record most of what you call Foley sounds ourselves. On 'Bury A Friend' there's the sound of a dental drill, and a staple gun. Billie has had Invisalign for a year and a half, and she often goes to the orthodontist, and they sometimes have to file down the attachments of these clear braces, so one time she recorded the drill, which we thought was funny and interesting. So we popped it into the song, and also the staple gun, with the image of stapling your tongue. The song is about a nightmare, so these sounds illustrate that. I use a Tascam DR–05 to record all that stuff. It is really great, really simple and small, and it gets the job done. I really like that thing."