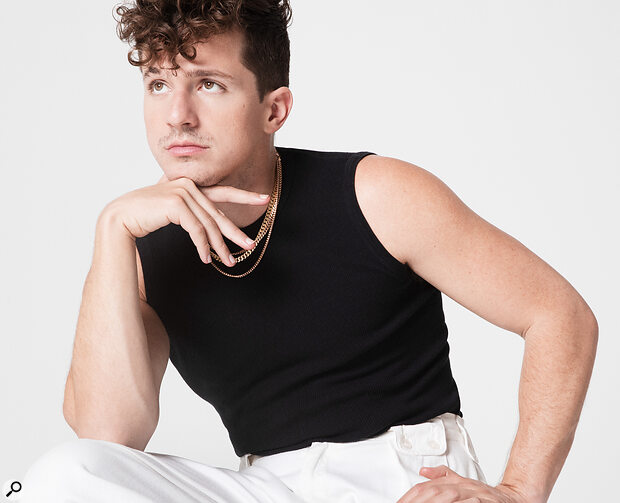 To find himself as an artist, Charlie Puth swapped high‑profile co‑writers for fan reaction on TikTok. It seems to have worked...

It’s easy to imagine that life is a bed of roses for an insanely talented artist who hit the big time at the age of 24, and has had half a dozen multi‑platinum hit singles and five Grammy Award nominations. However, in the case of Charlie Puth, you would be wrong. The American has perfect pitch and the aural equivalent of a photographic memory, an endless stream of high‑quality creative ideas, and a way with social media that attracts audiences by the million. Yet despite this abundance of talents and achievements, Puth’s big challenge throughout his career has been to find his own direction and identity.

Puth broke through in 2015 with three major hits in one year: ‘Marvin Gaye’ (with Meghan Trainor), ‘See You Again’ (with Wiz Khalifa), and ‘One Call Away’. Several more big hits followed, including ‘We Don’t Talk Anymore’ (2016, with Selena Gomez), ‘Attention’ and ‘How Long’ (both 2017), and ‘Done For Me’ (2018, featuring Kehlani). Following his 2016 debut album Nine Track Mind and 2018’s Voicenotes, Puth then released a number of singles that were due to appear on a third album called Sick. The co‑writers included big names like Andrew Watt, Louis Bell, Ryan Tedder and Benny Blanco. But in early 2020, the project was ditched. Puth wrote: “I scrapped the album I was working on because none of the music felt real. It’s almost like I was trying to be too cool in a way. It’s back to the way it used to be. Me, alone in my messy‑ass room making beats.”

A dressing down from Elton John, who told him that his 2019 music “sucked”, played a part in the decision. “It was a bit of a wake‑up call!” says Puth. “But I agreed with him. I also met him in a restaurant, and he told me that I was working with too many people, and that I should go back to producing my music myself.

“I went through two major break‑ups, one professional and one romantic. I relied on a group of people at my record company, and one person in particular, to give me feedback on whether this or that song was good enough. The break‑up left me uncertain of myself, because I had been working in this way for six years. I was also surprised by how similar the feeling was of the crash‑burn ending of both the professional and the romantic relationships, even though the two had nothing to do with each other.”

Around this time, the Covid epidemic forced Puth to spend a lot more time in his messy‑ass room, where the songs for his eventual third album Charlie would come together. “The pandemic hit and we were forced to not see a lot of people. I had to start the album by myself, and by having conversations with myself. I almost called this album Conversations With Myself, tapping into feelings that I had never addressed in any musical form before.”

Deprived of the opportunity to interact with other writers in person, Puth reached out to his fans online. “I have written some of my biggest songs after coming off stage. I made ‘We Don’t Talk Anymore’ and ‘Attention’ immediately after having played a show, still feeling the energetic connection with the audience. Also, not having that key person at the record company any more to give me feedback, and having Elton, in the nicest, most loving way, tell me that my stuff was no good, I did not know whether anything I made was any good.

“So I turned to TikTok, and basically gave a preview of a song idea I had for ‘Light Switch’, and asked ‘What if there’s a song that starts with... would it be good?’ I really meant that. When I uploaded the video with the ‘Light Switch’ song idea, I thought, ‘If it gets a thousand views, maybe I’ll finish it.’ But it got 10 million views in one evening, I believe. That was a big, affirmative thumbs‑up to finish the song!”

Puth first presented his ‘Light Switch’ song idea on TikTok in September 2021, and continued to post new videos with developments of the song and details of his production process. He then teased his audience about release dates, creating a viral storm even before the song was released. It’s been described as the next step on TikTok, from songs going viral on the platform after their release, to songs being made and going viral even before being released.

Puth has since posted countless entertaining videos along the lines of, ‘What if I used this or that sound?’ and then building a song arrangement around said sound in Pro Tools. Sometimes the sounds are given to him by fans, with Puth using his perfect pitch to great effect, immediately identifying that, for example, two dog barks are a B and a Bb, and putting a groove and bass line underneath. In the end, several of the songs on his new album grew in interactions with his fans, because, says Puth, “I was yearning for the energy of people. So I got that through the Internet.”

In many of his online videos, Puth turns his perfect pitch into a party piece, as well as his seemingly encyclopaedic knowledge of recorded music history, which he says is the result of his aural photographic memory. When asked whether these talents are a help or a hindrance when writing music, his answer is elaborate. “The best thing about perfect pitch is that I hear songs I’m writing in my head all the time. I may work out, or eat lunch, and if the song has not left my head while I’m doing other things, after a while I give myself permission to take it out of my head and put it into my DAW. I take these stems out of my mind and put them into Pro Tools. I don’t allow myself to do this if the song does not stick in my head.

Charlie Puth: All these songs that have reached millions of people have demo vocals. I’ve never been able to re‑record vocals that I was happy with.

“Perfect pitch allows me to do this, I guess, but it’s not essential for making music. It’s like the cherry on top of the whipped cream. Another thing that perfect pitch is good for, is that I never forget a song once I hear it. Maybe the two things are distant relatives. All I know is that I am profoundly terrible at everything else in life. I can’t cook, I can’t clean, but I certainly can hear a song and play it back for you.”

It seems that for Puth, his aural photographic memory is more important than perfect pitch. “I would not be able to make music without that memory. My previous album, Voicenotes, was all about that very important time period of the late ’80s, going into the ’90s, with Lisa Stansfield’s ‘All Around The World’, and Johnny Hates Jazz, when sonically drums got beefier, and everything led into dance music. Voicenotes was heavily nodded to that sonic period.

“With my new album, I am not really sure what to call the genre. My record label asked, ‘Is it a rock album, is it a pop album?’ I guess it is a pop album because all of the 12 songs came about from the feeling that I got from listening to some of my favourite pop songs. For example, there is a song by Jimmy Eat World, called ‘The Middle’, that came out in 2001....