I know it's been a while since it appeared, but I just had to say thanks a lot for Robin Bigwood's Sounding Off column in the SOS November 2006 issue; it's been really inspiring!

A friend and I both write dance music and usually we spend a few weeks on a track, whereas we feel most other dance producers spend a few days on tracks, at most. We always had the feeling that we were taking too long to write tracks, spending too much time on the finer aspects. But recently we got some really positive reactions, praising our attention to detail.

Initially we thought our material was missing something, but after reading your column it dawned on us that there might actually be something good about the way we work... weird, huh? It just seems so easy to overlook your own talents.

Robin's remark that "nobody ever walked down the street whistling a mixing desk" has also really struck a chord with me. It has kept me from habitually reorganising my studio every two days, even when it was already well organised. I now have more time to make music. Thanks!

As Paul White points out in his Leader column from SOS June 2007, one possible progression for surround sound could be portable audio players. But even if surround versions of the headsets will not fly, there is another interesting alternative.

Multi-channel sound can be rendered for binaural playback, and one successful example of this is the development of Dolby headphones. The recently standardised MPEG Surround is another brilliant achievement.

An MPEG Surround file consists of a container that can hold any type of normal stereo signal (MP3 or AAC, for example), plus a low-bit-rate stream of positioning parameters. The positioning information can then be used to generate a 5.1 (or 7.1) output to a normal speaker playback system, or it can decode in the binaural mode where it directly renders audio for headphone playback.

Another nice feature is that the file should even play in legacy stereo devices (they will ignore the positioning stream), so publishing the music in MPEG Surround format at Internet music stores should be safe from a backwards compatibility point of view. Also, the amount of positioning information in the data stream is very small, so there is not much of a quality sacrifice.

It is, of course, difficult to get perfect discrimination between front and back, since humans can only rely on frequency content (mainly around 8kHz) and movement of the source (since movement of the head is not possible and normally there are no visual cues either). Also, discrete multi-channel sound is better for high bit-rates and loudspeaker playback. But I think it could very well be that MPEG Surround could boost the so far weak surround 'pull' from the market, due to the perfect alignment with portable music players. It is also well suited to multi-channel broadcast, where there are bandwidth restrictions, such as with DVB-H, and Internet radio. 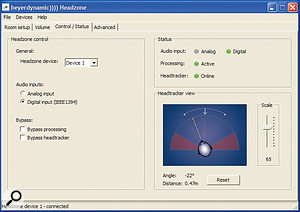 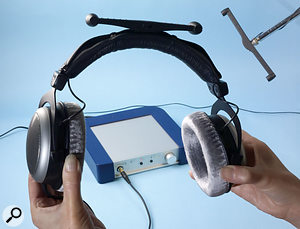 Beyerdynamic's software-controlled Headzone system employs head-tracking technology in a binaural design built on DT880 open-backed headphones. An important step in the development of portable surround sound will be to integrate similiar technology into lightweight, stand-alone earbud-based systems. Technical Editor Hugh Robjohns replies: I am a strong advocate of surround sound and don't share Paul's pessimism about it. But I think he is correct in suggesting that the format won't really take off commercially until a convenient and reliable method of presenting surround sound through earphones is established.

Binaural is clearly the best, and indeed the only format with which to achieve this; huge strides have been made in recent years to provide more accurate and stable binarual imaging; this is partly down to improving understanding of the critical Head-related Transfer Functions (HRTF) that determine the perceived audio imaging, but also due to the availability of more cost-effective technologies in terms of DSP and head-movement detection.

The biggest hurdle to overcome is the ear's inherently poor discrimination between front and rear images, something we resolve in real life by small head movements to confirm spatial position. Simple binaural material tends to produce unstable images which collapse behind the listener, simply because head movements don't provide the required sonic changes needed to confirm source position. However, the addition of head-movement sensors which control the implementation of the HRTF processes to provide those aural clues enable remarkably stable and realistic surround sound.

Studer developed a stunningly good convolution-based system to advanced prototype stage a few years ago (Binaural Room Scanning), but have yet to market it, largely because of its very high projected retail cost. More recently, Beyerdynamic have produced the Headzone (reviewed in SOS March 2007 and on-line at www.soundonsound.com/sos/mar07/articles/headzonepro.htm), which uses a simpler modelling approach, but still achieves excellent results. In both cases the key to success has been the inclusion of head-tracking to control the corresponding binaural processing. Quite how head-tracking can be incorporated into compact stand-alone earphones remains to be seen, but I'm sure someone is working on it!

As for the delivery medium, I don't think this is a problem at all. Dolby Digital is already a very well established and effective low bit-rate surround sound carrier. The 'stereo plus steering' method being advocated by MPEG is also an interesting alternative, and something very similar is in use for experimental surround sound radio broadcasts in parts of the USA.

But for me, the obstacle that we must overcome is not how to deliver the material to the end user (there are already lots of systems that can achieve that very practicably), but how to produce believable, stable surround images. And I think that means a head-tracking mechanism of some sort, and the associated HRTF processing.

We'll have to wait and see what technology can deliver to make this happen in the years to come, but I would urge today's musicians and technicians to capture their music with future surround sound applications in mind to maximise their opportunities.

Logic's XSKey: one of the most expensive USB sticks in the world?

I was appalled to read in your May 2007 Logic technique article that Apple expect users to re-purchase the entire Logic product in the event of a lost XSKey. Your author offered justification for this policy by comparing it with the loss of a hardware synth, but I think this is a totally unreasonable comparison. If I buy a hardware synth, I own it. However when I purchase software (Logic included), I only own a licence to use it, the disc(s) it came on and, if I'm lucky, some printed documentation. Payment is primarily for the intellectual copyright.

Not only did I pay for the use of my copy of Logic, I also registered the purchase, so Apple should have my user details, making the issuing of a replacement key a simple and inexpensive process. Given that USB RAM sticks with built-in MP3 players can be bought for less than 20 quid in your local supermarket, for Apple to charge even $89 for a replacement key is seriously taking the mick. It's not as if the risk of theft is a problem; Apple could easily nullify any reported lost XSkey, thus preventing anyone from registering a stolen copy of Logic with that key (much like a bank would do with a lost credit card).

Surely the whole point of the dongle (and registration, to a lesser extent) is to prevent people from ripping off Apple, not to provide Apple with the opportunity to rip off its paying customers.

I was interested to read the Sounding Off discussion between the Performing Right Society (PRS) and Paul Farrer [SOS July 2007]. But I was amazed at the Society's opening statement: "broadcasters use more music than ever before, and this has significantly reduced the amount of money that a music minute is worth". It seems totally unbelievable that anybody can justify such a remark. Why do the PRS not insist that the TV production companies or broadcasters pay per use? It's like going to a petrol station and saying, "two gallons of petrol please; tomorrow I will have three gallons, but I'll still pay for two".

I love Sounding Off — it's the first thing I read when I open a new issue. I agree with Oli Freke's argument in SOS August 2007, but it's just a shame that his opening statement about two of the pioneers of electro music is wrong. After all, both Klaus Schulze and Peter Baumann played acoustic kits in Tangerine Dream, and the seminal self-titled Kraftwerk album used acoustic percussion. True, both bands eventually eschewed the acoustic kit in preference to electronic replacements, and that reinforces Oli's argument, but it's a shame he didn't present it as such.

A great edition: keep up the great work on what is undoubtedly the finest recording magazine in the world. That is no mere sycophantic statement, as I make a point of reading all English language recording magazines.

News Editor Chris Mayes-Wright replies: Thanks for your kind comments about the magazine. Your email was one of the many we got in response to Oli Freke's 'In techno, the machine rules...' Sounding Off article from our August issue, in which the author laid out his objection to the use of acoustic drum kits in electro music. Due to the controversial views in the piece, many comments that we received were very strong indeed. A few readers were even dissatisfied that we'd allowed the piece to run at all.

But of course Sounding Off is the ideal place to air views such as Oli's. It is an opinion column open for contributions from any reader or industry figure, providing the quality of writing is up to scratch. It's a place to stimulate, spark debates and pose questions (hypothetical or not) to fellow SOS readers, with the potential to make changes to the way we in the music technology industry go about our business, work-based or otherwise. As the small black box on each Sounding Off page states, we encourage you to submit your Sounding Off articles to the editorial department, either by writing to us using the address in the front of the magazine, or using the email address soundingoff@soundonsound.com. We look forward to all your submissions.