A Matter Of Opinion?

Last week, I visited my local music store to demo Emagic's Logic v6 on a Mac and listen to Mackie's HR624 speakers. I was inspired to do this after reading so many reviews on these particular bits of kit where they were referred to as 'industry standards'. Armed with a couple of CDs for reference purposes, we got started, demoing Logic v6 first. 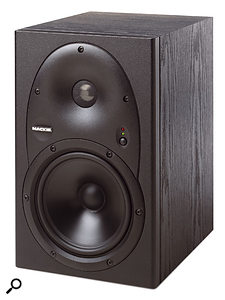 All of the opinions in our reviews are of course subjective (albeit based on many years of listening experience), and nowhere more so than in monitor reviews. When in doubt, listen for yourself!After seeing the single-button mouse (and the consequent need for the use of keyboard modifiers to access many functions), the numerous pull-down options, and the awkward window re-sizing (reminiscent of the quaint Atari I left behind five years ago), I became disillusioned. Coming from a PC background, I thought it would have been much easier to take on the Mac. The clincher came when I asked to look at the Drum editor. I was amazed to discover that Logic doesn't have one. Instead, there was another editor with a five-octave keyboard on the left-hand side of the screen; I had to figure out what was mapped to each key! I much preferred my old Steinberg MIDI drum editor on my Atari, with, say, 10 drums listed, not a full piano keyboard. So much for progress within the music-software industry...

Next, we listened to the Mackie HR624s. I whipped out my America CD, and played Track 1, 'Riverside', hoping to hear a nice lush acoustic guitar intro, with a warm Fender bass. Not so. The monitors sounded terrible; so harsh that I could hardly tell I was listing to six- and 12-string acoustic guitars, and the Fender bass was hardly audible. We A/B'ed with the passive PMC TB2S, and there was no comparison — the PMCs were much smoother, detailed and more accurate, and there was an impression of more bass. They were also cheaper!

There was no way I could have used the Mackie speakers as a reference. When I got home, I decided to check my sanity, and put on the same track on my hi-fi, a Technics HD51 system (CD, radio and tape). Straight away, I could tell I was listening to six- and 12-string acoustics, with a warm bass. Note that the entire Technics system costs hundreds of pounds less than the Mackies!

This makes me think that in future, I should stick with a company that specialises in one type of product. And furthermore, that I shouldn't simply take the word of a magazine review, but always go along and listen for myself.

Editor In Chief Paul White replies: I have to say I felt exactly the same way about Logic for about six months after I changed over from Notator on the Atari, but it was worth the effort. I still think it is a brilliant product, even though it doesn't have a dedicated drum editor (you can use its Hyper Edit feature to work on drum parts). The latest versions of Cubase are equally complex and powerful, but because of that power, these cutting-edge sequencers are inevitably much deeper than any of the old Atari programs. There's really no practical difference between programs running on the Mac or the PC once you have them up and working, because the designers try to make the versions as much alike as possible, although as you are probably aware, the latest incarnation of Logic is Mac-only.

As for the Mackie monitors, I'm sorry you didn't like the HR624s and disagreed with our comments, as I find them excellent for mixing in project-studio conditions, and so do many of my friends (though I use the larger HR824s myself). They are indeed very slightly on the bright side of neutral but they are very adjustable, and have a more extended and well-controlled low-end than most small monitors. Perhaps you heard them in an unsuitable environment, or perhaps the rear-panel voicing switches had been tweaked; I don't know. Nevertheless, if you didn't like them, that's fair enough, as speaker appreciation is of course a highly subjective matter. There's clearly nothing wrong with your taste if you like the sound of PMCs, as they build excellent speakers, and our Technical Editor Hugh Robjohns seems addicted to them!

And finally, I agree that you should always, where possible, listen to a product yourself, no matter what reviews may say, as opinions and methods of usage can differ from one person to another. However, we pride ourselves on saying exactly what we think, so whatever we write, you can be assured that it's what we really believe.

It's All Greek To Me

Len Sasso, in his Q&A response on scales in last month's SOS, clearly knows his stuff, but I'm not convinced that he explained the diatonic concept as well as he might have — there's more to it than he let on. The word 'diatonic' comes from two Greek words: 'dia', meaning 'through' or 'by' and 'tonos', which roughly means 'tone', or 'sound'. Thus 'dia tonos' approximates to 'by tones', or perhaps 'between sounds'. The exact meaning of this is, quite literally, lost in the mists of time.

Musical intervals were first studied by the Pythagoreans (an ancient Greek cult) around 400BC, and the problem is that nobody is completely sure what the word 'tonos' meant to them. The modern and very specific interpretation of a tone as two semitones was almost certainly unknown to them, as was the notion of harmony. What is fairly clear is that it didn't refer to a seven-note scale the way it does today. Moreover, the study of music was part of a wider study of the notion of proportion, and so the word most likely had other meanings as well as the purely musical ones.

While we're on the subject of tones and intervals, Len gives a nice description of the 'cycle-of-fifths' approach to generating the notes of the diatonic scale, and he's quite correct in pointing out that if you use this approach you get a different (slightly sharp) set of pitch values compared to the equal-temperament scale (which, I believe, uses fractional powers of 2 to generate the chromatic intervals).

However, the cycle of fifths is not the only way to generate a usable set of musical intervals. The Pythagoreans were, amongst other things, brilliant mathematicians, who used a system of proportions. Using this system, an interval of 2:1 represents an octave, 3:2 represents a fifth, 4:3 represents a perfect fourth, 5:4 represents a major third, 6:5 represents a minor third, and 9:8 represents a tone (ie. two semitones). This approach can easily generate any of the diatonic scales that make up the ecclesiastical modes (not to mention a few others...), albeit with slightly different pitch values again.

If anybody wants to discuss the ancient Greek approach to music and note generation, I can be contacted via SOS.