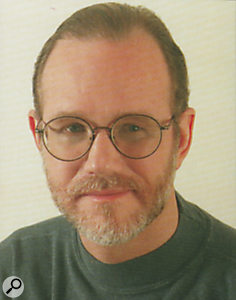 Bob Katz: poet, philosopher and mastering engineer (though not necessarily in that order).I would like to thank Hugh Robjohns for his fantastic review of my book [Mastering Audio, reviewed in SOS October 2003]. I am currently red in the face and quite embarrassed at all the nice things he has had to say. On the subject of the rather curious poem at the end of the book, let me explain how it came to be.

At the time of writing the book, I was in a very depressed mood about the state of current popular music recordings on CD, and the state of the music industry in general, with record companies looking for one-hit wonders instead of going for long-term artist development.

I had decided to write a chapter in collaboration with mastering engineer Bob Olhsson. Although the chapter came out full of ideas for the future of the record business, it was also full of admonitions about record companies and the quality of recorded sound today due to the 'loudness race'. But when I saw how that chapter was coming out, I decided it would be a shame to end a book on such a downbeat note. I decided that an upbeat, forward-looking approach was better, so I wrote a poem about the rosy future of the audio and music business. Given the dismal alternative chapter that was originally to be used, I think I made the right decision in including an upbeat philosophy ('we can change the world') at the end of this largely upbeat book!

In conclusion, I promise to make an equally concerted effort to produce a second edition which includes DVD, DVD-A and SACD authoring, more on surround-sound mastering including fold-downs, as well as other concepts that were missed out in the first edition! It's an ever-changing field, and we engineers must continue to adapt.

Very best wishes, and thanks again for an incredible review!

In response to Martin Walker's article on the page file (PC Notes, SOS October 2003), I've encountered a problem. Making the page file 100MB for systems with 512MB of RAM will cause an 'out of memory' message in Gigastudio when using large files like Voices of the Apocalypse. Regardless of physical RAM in use, Gigastudio seems to need the page file to use its disk-streaming feature. Setting it too low will cause a problem that isn't obviously related to the XP page file.

Martin Walker replies: I've never had this error with Gigastudio, even when loading lots of large instruments, but that's not to say it won't happen on other PCs. New Gigastudio users are often surprised at the amount of system RAM it needs. The majority of sample data is streamed from the hard drive in 'real time', but to ensure low latency, the first 64K of each voice is stored in a buffer when you initially load the instrument. Stereo sounds use two voices, while those with multiple velocity layers and other performance options may require considerably more RAM. For instance, Scarbee's RSP 73 has 73 notes, each with 12 velocity levels, and a further 12 layers of release samples. That's 1752 samples to be buffered. On my PC, with 1GB of RAM, the Gigastudio memory readout is 22 percent after loading this one instrument!

Still, I'd be surprised if the memory error occurred after following my advice to make the page file's Initial size 100MB and the Maximum 800MB, since if Gigastudio required a larger file than 100MB it ought to expand automatically, subject to the 800MB maximum. To test this, I loaded instruments until Gigastudio's Memory readout read 92 percent, at which point the Cacheman utility (www.outertech.com) reported that 904MB of physical memory was in use, but still only 3.5MB of the 100MB page file. I received no error reports, and all instruments played back perfectly at high polyphony. After all, the page file is designed as a hard disk overflow for stuff that can't be held in physical RAM, and as long as you don't exceed 100 percent on the Gigastudio memory readout, you should be OK.

Despite this, I have spotted other Gigastudio users complaining of getting 'Error Code 5: Unable to Allocate Memory' messages on Windows 2000/XP. These can allegedly be cured by changing the Registry value for the' I/O Page Lock Limit'. Its zero default setting uses 512K of memory, but this can be increased to provide a possible performance boost. The easiest way to do this is, again, using Cacheman. I've also seen a recommendation to change the LargeSystemCache Registry entry from zero to '1' (run Regedit and do a Search), for systems with 512MB or more RAM.

I've not needed either of the above, and I'm generally suspicious of such anecdotal tweaks, but if anyone does get this error message, try them. If it works, drop me an email at martin@soundonsound.com and I'll pass on the good news.

Return Of The Mackie

I read with interest Paul Butterfield's letter in Sound On Sound's October 2003 edition, in which he opined that the Mackie HR624 speakers he listened to in his local music store "sounded terrible". I would like to respond to Paul on behalf of Mackie Designs UK.

Firstly, I have to say that there are many happy Mackie HR speaker owners who would disagree with you, but that of course you are entitled to your opinion. However, I wonder if you have considered the following points.

If you are used to hearing your test CD on a hi-fi system, perhaps you were only disappointed that the track didn't sound as you were used to hearing it. Mackie speakers are designed to come as close as possible to exhibiting a flat frequency response, and not to flatter the sound reproduced through them, as hi-fi speakers usually are. So the HR624s will not, by definition, sound like hi-fi speakers.

Secondly, could it be that the listening environment you were working in was less than ideal? In my experience, there are very few retail showrooms where one can achieve a properly set-up A/B comparison without a lot of other background noise interfering. Also, since the Mackies are active, they offer a high degree of 'tweakability' — sensitivity, acoustic space adjustment, HF and LF adjust. Did you experiment with the settings of the HR624s, and can you be sure they were not set incorrectly?

To conclude, I would like to offer you the opportunity to listen to our full range of speakers again, in a more controlled environment — one that's closer to a real project studio. SOS will put you in touch with me, and I will arrange a listening session in a professional studio at your convenience.