Diary Of A Mac Pro Upgrader

The Journey Is The Reward? By Paul Baggott 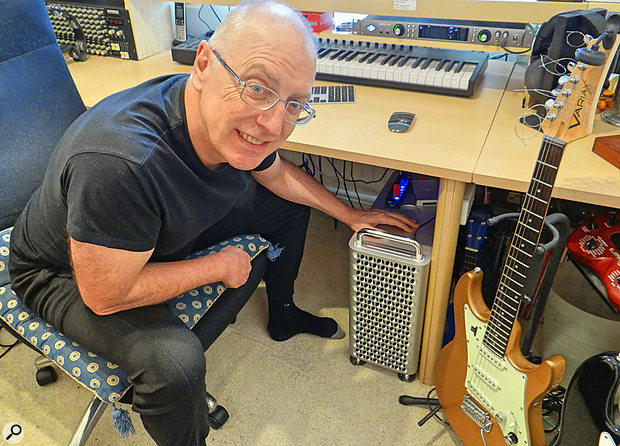 The article author Paul Baggott, proud owner of a new Mac Pro, at the end of his journey.

Like many SOS readers, Paul Baggott's studio centred around the original 'cheesegrater' Mac Pro tower but in 2020 he could hold off no longer and needed to upgrade. In our 'web-only' feature, we thought you'd enjoy reading the trials-and-tribulations tale of Paul's journey and his real-world experiences as this producer bites the bullet and buys a new 2019 Mac Pro.

It is a mid-2012 model 2.4GHz 12‑core with 20Gb memory. I vaguely know what those numbers mean but I’m far from expert. I was recently advised by someone whom I respect that my current machine is slightly underpowered for its task. Who knew? However, it has performed admirably for the past eight or nine years and it has enabled me to make a modest living from remotely producing people’s music from many parts of the world, which I absolutely love doing. My music is currently being used by the BBC, Channel 4, MTV and quite a few others.

I’ve had a recording setup since my early teens. Bouncing audio between a Bush Radio Cassette Recorder and an ancient Marconiphone reel-to-reel tape machine sparked this long-term obsession with making music.

I then bought an Akai 4000DS reel-to-reel tape recorder with a 'Sound-On-Sound' button that disabled the erase head so recordings could be layered on top of existing recordings. I met my wife and she bought me a second Akai 4000 DS.

Next, I entered the world of Portastudios with a four-track cassette machine made by Yamaha. Then to an eight-track reel-to-reel with a desk, followed by a 16-track reel-to-reel with a bigger mixing desk. That particular setup morphed into an analogue/digital hybrid comprising the 16-track tape machine, multiple outboard sound modules, keyboards and FX, a sampler, an eight-track digital recorder all synced to a hardware sequencer.

Following that unwieldy, clumsy but great-looking setup, I apprehensively stepped into the world of music computers with a PC running Emagic’s Logic sequencing software. Almost immediately, and slightly alarmingly, Emagic sold out to Apple.

I bought my first Mac Pro a couple of years later. I am now on my third.

Though my current Mac Pro is still going strong, it is approaching its twilight years. I am beginning to notice some of the newer and hungrier pieces of software are not performing as smoothly as I would like. My drives are the slower SATA spinning ones and as such booting up and software loading times are slow. Performance of some of those instruments is also compromised in some situations and I am reluctant to use them because of this. I had lustfully read about faster SSDs but couldn’t justify the price.

So I began considering what my options were regarding replacing my ageing Mac Pro. I vaguely considered a PC as my son had just built one. But Logic Pro is the DAW I have always used. It feels like home and I am producing commercially viable music with it. I don’t feel I want to spend time and nervous energy learning a new DAW at this stage.

I was not impressed by the 2013 Mac Pro, the 'trash can' cylinder design that replaced the 'cheesegrater’ tower design of which mine is one. Everyone, including Apple themselves, were saying its non-modular design was flawed.

So I looked at the iMac Pro. Lovely looking machine but the screen was surplus to my needs even though, as far as I could see, there were versions of it that seemed more powerful than my current machine. More power and speed, I decided, were my priorities.

Rumours began about the release of a new Mac Pro and many mouths began to water. The rumours seemed to go on for years but it was probably only a few months.

When this new Mac Pro was finally officially released there was a great deal of consternation, particularly amongst the music community. The main complaint was that it was too expensive and too powerful for musicians' needs. They complained that it was aimed at the film and animation industry and musicians had been ignored.

I’m not sure I agree with it being too powerful. Can you ever have too much power? Software is becoming more greedy so who knows what the next 10 years will bring. I'm looking forward to it.

At £5,500 (GBP) for the base model, that is expensive. My earnings from music production would not cover the cost of a 2019 Mac Pro outright.

So, instead, I began thinking about upgrading my current 2012 Mac Pro. Or buying a more powerful reconditioned one — but it felt like I would be heading for a dead end eventually. I felt slightly stuck!

I’m hopeless with money. My wife, however, is a very skilful manager and saver. Over the years she saved to cover the replacement of, or repairs to my studio Mac. She had also saved money for a cruise. But due to family circumstances (and other things) we are not able to take a holiday for the foreseeable future.

She asked me if I would like to combine the two and buy a new 2019 Mac Pro. It didn’t take a lot of thought! With her blessing, I could now spend the cost of a small car on a new Mac Pro.

To put it in perspective though, over a 10-year period, which I hope is a reasonable estimation of the new Mac's life, I would need to produce seven songs each year to cover the cost, which is more than doable.

I watched a number of online videos of the new Mac (why do we still call them ‘videos’?), but they were all based on very high spec, very high cost versions of it. I don’t know if they were review machines. I understand it is very difficult to get Apple to lend machines for review purposes but if they did, it makes sense to lend out the most impressive machines they have.

The video reviewers were very clever people at the top of their game, extremely technically savvy, and able to install their own components unlike myself and the majority of musicians, I suspect. They were a good watch. I was particularly interested in the fact there is no wiring at all inside the Mac Pro.

However, they were not that helpful to me personally. I would have liked to have seen videos looking at the power of a base model compared to an earlier version of the Mac or current versions of the iMac Pro with music production as its focus. 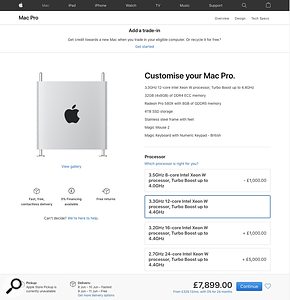 Apple UK website's 'Customise your Mac Pro' page. The price has risen since the author ordered his machine and paid £7,659 for it.My next port of call was the Apple website. There is a section on which you can ‘Customise your Mac Pro’. It is also possible to speak to someone live while you’re doing it via text. This was extremely helpful. On the four or five occasions I used this facility, it was invaluable and all the advisors were friendly and knowledgeable. After much to-ing and fro-ing I was given four quotes based on my requirements.

32Gb of memory comes as standard, which I was assured is more than enough for my needs. As my current 2.4GHz 12‑core (2012) Mac Pro is underpowered (apparently) I wanted to make sure I had plenty of power — to future-proof myself. There was an option of a 3.3GHz (which can be boosted to 4.4GHz) 12‑core processor. This, I was told, would effectively be almost twice as powerful as my current machine. That sounded good to me.   At the moment, on my current Mac, all the audio samples for my software instruments are stored on a separate, slow SATA drive causing the slow loading and other operational problems. So I wanted a main drive that was big enough to house all of the software components.

There was the option of having two internal 4TB fast SSD drives installed in the new Mac. 8TB would have been great but the cost would have meant sacrificing some power. So I was given the option of 4TB internal storage plus an external 4TB LaCie drive, which I was assured was fast enough over USB3. This would mean I could keep the bulk of my projects on the external drive or use it as backup maybe.

So the spec of the machine I provisionally decided on was: 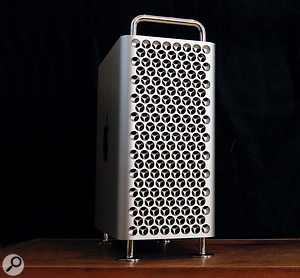 Somebody at Apple obviously has a sense of humour! The new Mac Pro design proudly reinforces the 'cheesegrater' monicker its userbase adopted for the original Mac Pro tower range.The difference between this and the base model is that the processor is the next one up (12‑core rather than 8‑core) and I chose more storage (4TB fast internal SSD instead of the base 256GB which seems a bit mean).

The quote was good for 90 days, which gave me time for more research with my new best buddies at Apple:

All pretty basic stuff. But there was one big question — the Catalina quandary...

The new Mac Pro would have Catalina automatically installed. If you didn’t already know, many pieces of music software are not (yet) compatible with Catalina — Apple’s latest operating system. Software companies are working on it but some of the legacy ones will never be compatible.

I have quite a few pieces of legacy and older versions of software that I use on every project. One being iZotope's Ozone 5 which definitely won’t work. In fact, it’s not even available for download anymore.

On my projects I use my own version of Stem Mastering. I have a mastering template set up using multiple instances of Ozone 5 all set to widen and sweeten in their own particular way. It works for me and I would have liked to have kept it that way (I do own Ozone 7 which is compatible but never really liked it and didn’t feel inspired to fully investigate it).

Apple support suggested it would be possible to do a clean install of Sierra (which I am presently using). With that in mind, I wondered whether it would be possible to clone my current drive in its entirety so that everything I have now would be available on my new Mac Pro. This would mean that my familiar way of working would not be affected and if I needed to re-open older projects, all the software would be available and the projects would be wholly retrievable.

I did a couple of weeks head-scratching and came to the conclusion that it would be a backward step to try and clone my current setup onto the new machine. It would be risky and may cause more problems than it solved. In any case, my son would inherit my old 2012 machine and would use it for music in the same way as I had. So it would be available to me to open old projects if necessary.

Having made that decision, it was time to commit!