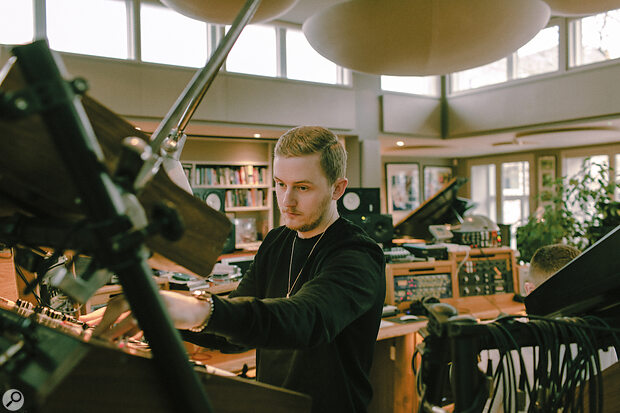 We speak to Disclosure’s tech guru Guy Lawrence about their journey from bedroom production to working with top‑flight stars in some of the biggest studios in the world.

It’s been 10 years since Surrey‑born brothers Guy and Howard Lawrence first began working together as Disclosure, blending dubstep and UK garage influences with classic house beats to create their own distinctive and very successful dance music. During that decade they’ve had two UK number‑one albums (2013’s Settle and 2015’s Caracal), been nominated for two Grammys and worked with vocalists as varied as Sam Smith, Lorde, the Weeknd, Kelis and slowthai. Their third album, Energy, arrived this summer, adding African rhythms and flavours to the mix.

Unlike other famous musical brothers (Liam and Noel Gallagher, Ray and Dave Davies...), the Lawrences get on very well, even when spending so much time in one another’s pockets. “Yeah we do,” says Guy. “Me and Howard are very different and I think we’re so different that it doesn’t lead to much disagreeing. Even in the band, we have very separate roles. Howard is lyrics, melody, concept, chords. The theory kind of side of it, the actual makeup of the music. Whereas I’m drums, the sounds of what Howard plays, structure, all the production and then the mix.

“So, we don’t really step on each other’s toes with that. We trust in each other to do the best job we can with those two roles, and we’ve definitely settled into that more over the last two albums. If one of us left the band, it would be screwed. It’s a yin and yang‑type thing.”

Both of the Lawrences’ parents were musicians — their dad a guitarist and singer in rock bands, their mum a pianist and singer in jazz and function groups — so it was perhaps highly likely that they would be inspired to follow them. Guy, the elder brother by three years, started playing drums at three, while Howard later picked up the bass. Both eventually learned guitar and keyboards and studied music and music technology at college.

“Our music tech course was pretty much a crash course in Logic,” says Guy. “So, that’s why I still use Logic today because it’s just what we started out with first. It was like, ‘Here’s an EQ, here’s a compressor, here’s what they’re for. Go work out the rest yourselves.’”

Initially, the pair were motivated by the advances in dance music being made by the likes of James Blake, Burial and Joy Orbison. “That’s really what inspired us to get working on our laptops and start messing around,” Lawrence says. “’Cause before that, I just had the intention of being a drummer in someone’s band. But I kind of stopped playing and started producing.

“For the first year we were literally making tunes living at our mum’s house, in the lounge ‑ laptop, headphones, Logic 7. It was a case of how many plug‑ins could you run before it crashed. It was very basic. All the early Disclosure stuff is all Logic stock plug‑ins.”

Gaining attention for a run of highly accomplished singles and EPs, the brothers made most of their Settle debut album in the loft above their father’s auction house in Reigate. They’d borrowed a pair of small Tannoy monitors from their godfather (who used to be in their dad’s band), along with his Roland Juno‑106, which was gathering dust up in his attic.

“The big monitors we had in the studio were a massive pair of Cerwin Vegas,” Lawrence remembers. “They were just so bassy, and so toppy, it was like being in a club. So, I used to pump it really loud through those when we were making tunes, and then use the Tannoys for actual mixing. The Cerwin Vegas came from the auction downstairs. I got ‘em for 40 quid with a free DAB radio or something [laughs].

“We had a crappy AKG microphone, 50 quid, I think, and an M‑Audio interface. So, it was all super low‑budget, very bedroom. But at that time, we were in just a good flow of ideas. Everything we were making was pretty good for the standard that we wanted to be hitting at that time.”

Beats‑wise, at the time Guy Lawrence was almost exclusively working with Logic’s Ultrabeat. “I didn’t have Battery at that time,” he says. “I pretty much switched from Ultrabeat to Battery. I remember my manager giving me a couple of sample pack CDs with all the Roland drum machines on. So, there’d be just folders of WAVs of 808, 909, 707. They were all recorded nicely, that was the difference.

“I found the Ultrabeat samples a bit crushy and just not that vibey. Whereas the sample pack he gave me of all the Roland stuff had been recorded through a nice Neve and a nice compressor. So, it just sounded a bit more professional.” 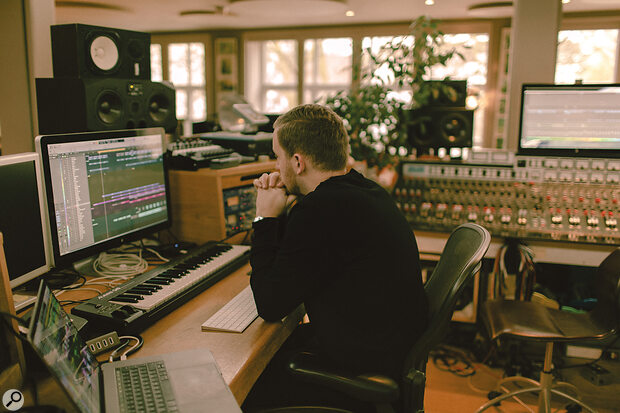 Guy Lawrence laughs as he recalls recording with Sam Smith in Disclosure’s ad‑hoc studio above the auction house. “I picked Sam up from Redhill station, drove him to the studio. We made most of ‘Latch’ in the first day. Then, I think we slept on it, went up to Jimmy’s studio in London the next day, ’cause he had a Neumann, and we tracked the vocals there. We rewrote the pre‑chorus as well, that was the key. So, we switched that around and that was it. Two afternoons. Great times.”

Elsewhere on Settle was ‘When A Fire Starts To Burn’, featuring the sampled words of American motivational speaker Eric Thomas chopped up into a rap. “We really wanted some kind of rap on there and we didn’t know any rappers,” Lawrence stresses. “We didn’t have access to these people, so sampling was the only way.

“Howard thought a kind of motivational speaker would fill that space. Although it’s a repetitive loop and there’s not much lyrical content, it feels like a rap. People call him the hip‑hop preacher and he was very happy to clear the sample for us.”

With the first two records, trying to achieve a professional sound with limited knowledge and just Logic stock plug‑ins was difficult.

For 2015’s Caracal, Guy Lawrence mostly expanded his palette of instrument plug‑ins. “So, we had better stuff for emulating a Rhodes, we had better stuff for emulating pianos,” he says. “We had a lot of Korg stuff, like the Polysix and the Mono/Poly. We did a lot of the second album at RAK Studios in London, so there were instruments floating about now and again which we’d try and nick and sample those.”

Disclosure also travelled to New York to record the track ‘Nocturnal’ with Abel Tesfaye, aka the Weeknd, booking into Alicia Keys’ Manhattan studio, Jungle City, with its 11th‑storey views over the Hudson River.

“Insane,” laughs Lawrence. “With the rotating vocal booth, so it spins and you can see the view. We had a bit more access to fancier studios. But we did keep it simple. We thought, ‘Well, the success of the album was so good first time. If it ain’t broke, why change anything?’ So, we kept it simple, kept it Logic.”

“We very, very rarely work remotely,” Guy says. “It’s always about getting them in the room — me, Howard, whoever it is, maybe sometimes Jimmy Napes as a lyricist as well. For us that’s how it works. I know people who can do it remotely, but for us it needs to be in the room. Probably ’cause we’re musicians and it’s more of a jam.

“One of the most enjoyable parts of our job is starting with nothing and finishing with something. And the only way we seem to be able to do that is with the person in the room to bounce off.”

Given that most studios are Pro Tools‑based, often without easy access to Logic, Guy Lawrence would typically bounce out a song and track vocals over WAVs. “We used an engineer, Gus [Pirelli], for our second album and some of the third,” he says. “Literally just so that I didn’t have to have my head in the laptop.

“I could listen and be a bit more focused on what was being sung and critique that, rather than thinking, ‘Oh we’re red‑lining, I need to change that.’ Then we would comp it in Tools and put it back into Logic.”

Nowadays, Guy tends to take his laptop and UAD Apollo into studios and record singers using his own Logic setup. “We recorded most of this album in LA,” he says. “It’d just be me and Howard rolling around to different studios with my Apollo. We’d always ask for a Neumann, a Neve pre and a Tube‑Tech and we just did the whole thing like that, straight in.

“Since the Logic 10 update too, with its amazing take folders and that sort of thing, I really get on with that way of doing things. So, yeah, I’ve learned that on the job, for sure.”