"The ubiquitous nature of recorded sound means that people tend to take it for granted,” insists Duncan Miller of the Vulcan Cylinder Record Company. "Simply seeing and hearing this process has given many people a new perspective on the business of recording.” 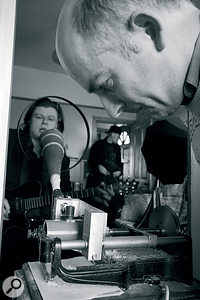 Tom Rodwell cuts a take live to wax cylinder while Duncan Miller (right) looks on anxiously.The process that Miller and singer‑songwriter Tom Rodwell are explaining is wax cylinder recording — which, you may be surprised to learn, is still alive and well. "It's a modern‑day field recording,” says Rodwell, "and an extension of the fetishism of reel‑to‑reel tape or vinyl records, where the limitations of the medium, that 'analogue warmth', as well as all those clicks and pops, sound satisfying to the ear.”

Sure, we all love a bit of tape hiss, but isn't this going too far? Not according to Miller. "For me, the artists who can transcend the fidelity restrictions and capture an audience with their message have something special to say. And anyway, it's fun and fascinating. Plus, this type of acoustic recording was the industry standard for over 35 years. Many millions of records were made using it, and some are still in the companies' catalogues.”

Rodwell elaborates on his reasons for embracing the medium. "I enjoy limitations, and since my music is nearly entirely improvised on the spot from a small set of resources — heavy rhythmic accents, no chord changes, the blues scale, fragments of 19th‑century gospel lyrics — the limitations force creativity and invention. With wax there's roughly two minutes to play with, and no overdubs or edits are possible. The limited fidelity also creates strange and intense resonances and ghosting effects — my voice can sometimes drown out the guitar, and vice versa — which adds a lot of drama to a song.”

So how does the process of recording to wax cylinder actually work? Duncan Miller explains: "The sound of the performer is concentrated on a small diaphragm, about 30mm in diameter, normally by a conical horn or funnel. The centre of the diaphragm flexes or vibrates, and directly moves a cutter that changes the depth of the groove cut in the wax as it revolves. The replay uses a round smooth stylus to trace the groove and replay the sound through a similar stylus and horn.

"I use a variety of original pieces of equipment to create the wax blanks on which the recordings are made, including a 1902 Edison concert phonograph as one of the recording machines and a master shaver from the 1930s when the cylinder was still the office dictation format of choice. The commercial recorder heads were hand-built by the recording engineers of 100 years ago and I have had to do the same. From contact with a precious few originals and lots of trial and error over 25 years of experience, I have managed to reclaim most of the secrets of reliable acoustic recording.

"The practical process is very variable. The room temperature, the type of wax (actually a soap formulation), the diaphragm material — thin glass — and the size and shape of recording horn all affect the recording, in the same way as the design of a musical instrument affects the tone and volume available. The playback is also dependent on the style and vintage of the phonograph used: early machines played into personal iPod‑style hearing tubes, later ones into large exponential horns, and the recording needs to be a suitable match to the playback for best results.”

"The frequency range suits the human voice and mid‑range instruments — 300Hz to 3500Hz is typical — and the sensitivity means that solo work and small groups are easiest to record, and the performance needs to have the energy to work the cutter and produce a convincing performance on playback.” 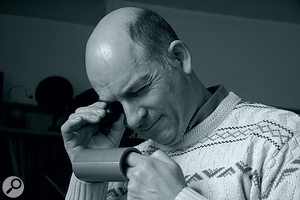 Duncan Miller inspects a completed wax recording for faults."You gotta sing really loud!” agrees Tom Rodwell. "Plus it's certainly entertaining to watch the cutter inch its way to the end of the cylinder as you record — you can see precisely how long you have left. Sometimes this means dropping a chorus or cutting an instrumental passage short. My improvisatory approach gives me a lot of flexibility. I'm sure that conventional songwriters would struggle.”

There is, of course, no microphone, or indeed any electrical equipment involved, but placement is definitely an issue. "I tend to sit with my head pointing into the recording horn, and with a guitar amp propped up on a chair nearby,” explains Rodwell. "If I'm with another musician, we all arrange ourselves around the horn, with the quietest sound, or most important element in the song, closest. It's a real process of trial and error, and that's just getting the balance right, let alone the song itself.”

Going a step further, Miller and Rodwell have formed the Back to Wax Revue, creating live performance from the recording process itself. "Occasionally Duncan and I put on a live cylinder event, where audiences can watch us battle for a good take,” explains Rodwell. "We also like audience participation — a few months ago we had a crowd in Sheffield screaming old gospel lyrics in a call‑and‑response pattern with me.

"I've recorded on one‑inch reel–to‑reel tape, and cassette, as well as various digital systems, and for me the fascinating thing with wax is that it's essentially an impressionistic medium. What the artist is doing is making the recording equipment vibrate with his or her music, almost like recording a band by miking up the floorboards below them. The cylinders are really little sculptures containing a sketch of your song — and perhaps they don't always replicate every acoustic detail, but on the right day they capture something true and beautiful. Which is the point of music, right?” Sam Inglis

Jon Hopkins is not an easy artist to pigeonhole, thanks in no small measure to an upbringing that combined classical training and rave culture. He counts Brian Eno and Herbie Hancock among his admirers, and he opened for Coldplay on their recent world tour. The diverse musical threads of his career have come together brilliantly on his new album, Insides, a genre‑defying blend of classical minimalism, ambient soundscapes, glitchy rhythms and brutal, distorted bass lines.

One of the most impressive features of Insides is the way it hangs together as a complete album. Is this something he owes to his classical training? Not consciously: "With regard to overall structure, on this record I always wanted a harsher, heavier first half followed by a more song‑like, quieter second half, so I guess subconsciously I was aiming at that all the way. My classical training was in piano rather than composition, but I reckon that maybe being exposed to loads of seriously structured music all my life has influenced my writing style.”

Said writing style is, however, about as spontaneous as can be. "I think it's fair to say that no actual forethought goes into my compositions — every time I have an idea while away from the studio and then try and realise it later, it turns out to be rubbish. In the end, everything that works for me starts from a sound I make or an improvised melody. I would say improvisation is the core of the whole thing; I try and work as quickly as possible in the first few hours of a track's life, chucking every bit of inspiration at it and getting worked up into a frenzy before coming back to it the next day and discovering that much of it is crap, but that hopefully some of it is not.” 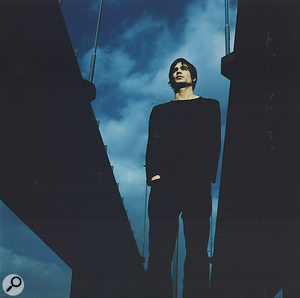 Jon Hopkins is one of a number of electronic artists whose work demonstrates that it's possible to make cutting‑edge music with lush production values on equipment that many SOS readers would sneer at. "I made this album on an enormous, close‑to‑death, extremely noisy laptop that was made by the now‑defunct Carillon. The acoustic elements were recorded through a couple of tie‑clip mics I got from Maplin, into a TL Audio dual‑valve preamp, and processed in a version of Sound Forge from 1999. The sequencing was done on a version of Cubase from around the same time. For the synths, I used my old [Korg] Trinity again, which I never seem to get bored of, and for effects I used an Eventide DSP4000.”

The sequencing to which Hopkins refers is not done with MIDI but recorded pieces of audio. "I avoid using MIDI. There's none on the album — it's all sequenced audio segments. On this record a lot of the tracks began as improvisation on the piano, which I then refined and recorded. I would then normally build up percussion tracks by hitting different bits of the piano with various objects, then processing and sequencing those sounds into beats. Then maybe I'd bring the string players in, or whatever.”

It's one thing to make beautifully crafted suites of intelligent electronica for home or club listening, quite another to take the stage in front of 50,000 baying Coldplay fans. How does Hopkins manage to create a compelling live experience? "Newer technologies have really made proper live electronica possible, and a lot more fun, I think. I use Ableton Live, controlled by a Novation Remote Zero, through an eight‑channel [Mackie] Onyx, which spreads the channels through some [Korg] Kaoss Pads and then into a small Mackie mixer, all of which I control on stage.

"I also have a big visual element, with projected animations cut to the music and triggered via MIDI. Plus, on the Japan tour and at the O2 Arena gigs, I had Davide Rossi joining me... he plays electric violin through a huge box of pedals and makes all kinds of crazy noises, as well as some beautiful melodies that fit amazingly over what's there.”

So what was it like playing Enormodomes in support of Chris Martin and his merry men? "Coldplay's audience were very welcoming,” insists Hopkins, and adds: "But my preferred arena, it has to be said, is the drunk midnight club audience...” Sam Inglis