At The Theatre By Phil Ward 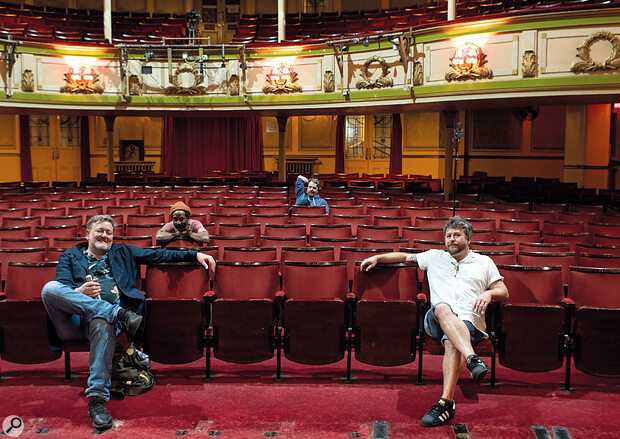 Elbow reacted against lockdown and their own tried and tested methods by hiring Brighton’s Theatre Royal as an improvised studio space.

When lockdown began, Manchester band Elbow found themselves with a tour cancelled and a big hole in the diary. Guy Garvey (vocals), Craig Potter (keyboards and production), Mark Potter (guitars) and Pete Turner (basses) collectively began to fill this gap by working together remotely on new song ideas, Garvey at his home in London and the other three members of the band in Manchester. The four used FaceTime and WeTransfer alongside network audio collaboration tools such as the Audiomovers Listento plug‑in to swap musical ideas and begin to build a set of new songs. Garvey has described the songs as having a quieter and more reflective quality than usual, perhaps echoing the isolation of lockdown and the unfolding tragedy of the Covid pandemic. 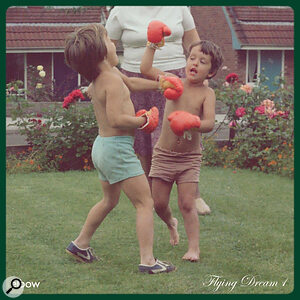 The last few Elbow albums have been tracked either at their own studio in the Blueprint complex in Manchester, or at Peter Gabriel’s Real World Studios near Bath, working initially with relatively sketchy song ideas. A significant amount of writing and arrangement would typically take place during the tracking sessions. For the new album, Flying Dream 1, however, the band decided to take a different approach and hire an unconventional ‘pop‑up’ location to track the album. Because this would almost certainly bring with it some time constraints, the songs would need to be fully formed and rehearsed.

“Our normal recording process is very much in the studio, so we go in and we write alongside recording,” says Elbow’s keyboard player and producer Craig Potter. “We’ve always been very much studio‑bound, so it was so exciting for us to do it the way normal people do! They book a place for a couple of weeks or a month in a studio and have to get it done. So for us, that pressure was a really welcome change. So we went in with parts learnt; the album wasn’t pieced together like sometimes they are. It’s all actual parts learned and played on the day. And so it was a really interesting, exciting way for us to do it.”

The next problem was to find a suitable space for the project. It quickly became apparent that theatres would not be reopening immediately after the end of full lockdown, so the band began to wonder if they might be able to hire one. “It was Guy’s thought that no one was using theatres, and it just felt a real shame,” recalls Craig. “And also we thought to do it in a theatre, because then we could pitch a film of the whole thing. We didn’t know which theatre when we had the original idea, but we were given a list and we knew it had to be a certain size... I think we felt we were a bit mad in a way, ’cause we didn’t visit the Brighton theatre before the session, but as soon as I walked through the door, down a little loading ramp and on to the stage, and could hear myself and other people talking, I knew it was going to be all right. It was a bit of a risk, but it worked out really well.”

Elbow’s long‑serving front‑of‑house and recording sound engineer Danny Evans concurs. “Yes, we got lucky with that. We had no opportunity to recce the theatre in advance, because of the Covid restrictions etc, so I was very relieved when I first heard what the room sounded like. The stage space had a great acoustic character, not too ‘live’.

“The Brighton session originally was supposed to be March 2021, but with the way the pandemic and the restrictions went, we decided that it probably wasn’t going to be sensible to do that, so we had to delay it. So there were a couple of months after full lockdown where Mark, Craig and Pete were working in Blueprint, and Guy would be working in his studio in London. They’d be constantly connected over FaceTime and also with the Audiomovers Pro Tools plug‑in, trying to make it feel as much as possible like they were all in the same room together.”

The Brighton session eventually took place in late June and early July 2021. In total, Elbow had two weeks to track 11 songs and, at the same time, produce filmed performances of them all. The core team comprised the four members of the band plus session drummer Alex Reeves, sound engineer Danny Evans, film‑maker Mark Thomas and Band Assistant Athena Caramitsos (see 'Covid Care' box). The in‑house technical staff at the theatre were on hand if needed, but the Covid protocols in place meant that they could only help at a distance. Further session musicians were brought in to contribute their parts towards the end of the session, so that any risk of introducing the Covid virus wasn’t taken until the bulk of the work was done. Danny continues the story.

“The song arrangements were fixed as much as possible. But there were a few things that changed, and one song in particular was completely revised. But things like that always, always crop up. You can plan to the nth degree, but if something’s not working in the cold light of day, then you have to change your plans. We tried to stick to 12‑hour days, roughly 10 till 10, apart from a couple of days that clashed with England matches in the Euros. So there were a couple of evenings where we stopped early and watched the football together.

“I’d worked out a channel list beforehand that would hopefully cover all eventualities, or at least most eventualities. So if the band decided that they wanted to do something different, the channels were all there in place ready, rather than having to take a big break while I reset for something different. The channel list was around 40 altogether. But I guess there probably wasn’t a song where we used more than 24 inputs. The 40 was just to give us different options plus channels for timecode, talkback/comms and...