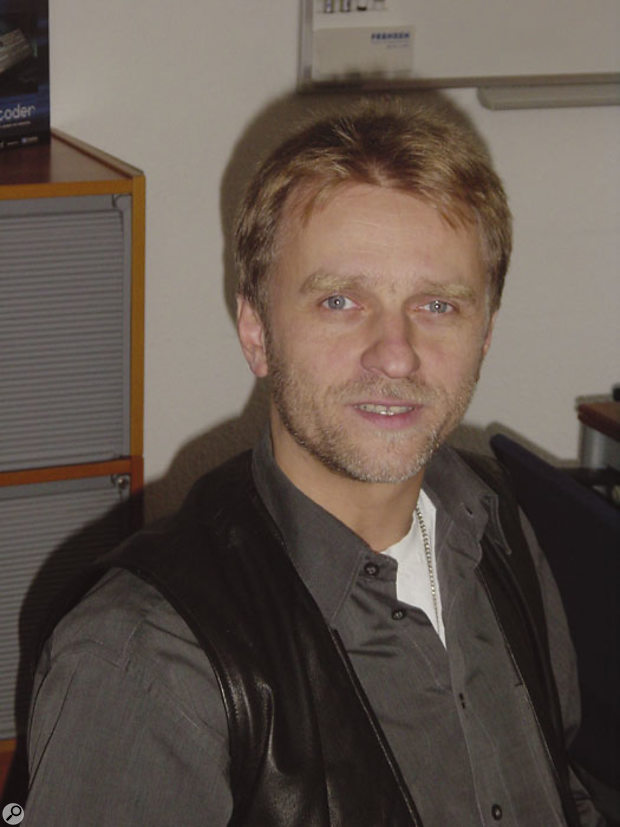 For many years, German designer Stefan Moeller has been on a quest to perfectly emulate Brian May's guitar amp sound. Now, with TC's new TC Thirty plug-in for Powercore, he believes he's cracked it...

Amazingly, Powercore, TC Electronic's stand-alone DSP platform for processing and instrument plug-ins, is already nearly three years old. During that time, the plug-ins available for it have expanded from the original TC Works effects software to include voice-modelling instruments from TC-Helicon. The last year has seen third-party companies joining in, with Sony porting their Oxford TDM plug-ins to Powercore, and now synth company Access have also got involved, announcing a software version of their Virus analogue-modelling synth for the platform, Virus Powercore.

Recently, TC took Powercore in a new direction when they announced two new amp-modelling plug-ins for the system. The entry-level Tubifex (originally announced back in December last year in the news pages of SOS as Voltronics prior to a name change) is to be bundled with all Powercore systems from now on, and runs in a hybrid mode utilising both host-powered Native power and the Powercore's DSP chips; apparently the amp modelling runs native and the speaker emulation runs on Powercore. Rather than copying specific amplifiers, this model comprises three virtual 12AX7 tube stages, complete with variable EQ, bias, HT voltage and distortion symmetry. It also includes speaker emulation and comes with a range of presets.

The other amp-modelling plug-in, TC Thirty, is a software emulation of Vox's time-honoured AC30 amplifier, and was developed in conjunction with Stefan Moeller. In contrast with Tubifex, this model is very specific in modelling the sound of the Vox AC30 as used by Brian May and includes a treble-boost emulation based on Brian May's own setup. Stefan, a self-confessed Brian May obsessive, has worked for over 15 years on this project; he started with analogue emulations, and then learned programming to that he could port his work into software. As finished in the form of TC Thirty, the emulation runs entirely on Powercore.

With any guitar-amp model, latency is a concern and Powercore has a processing latency that depends on the I/O buffers set for the soundcard, though using buffer sizes of 128 or even 256, you don't notice the latency. However, you can activate the No Latency mode inside the plug-in to remove Powercore's latency altogether while playing (at the cost of using more CPU power) and then turn this function off again after you have made the recording.

I spoke to Stefan Moeller about his fascination with the Brian May guitar sound and he explained the background to the project.

"I have studied electronics for more than 20 years, and have always played guitar, but I was particularly interested in the playing and guitar sound of Queen's Brian May. I tried lots of different amps and guitars, but after reading interviews with Brian, I learned that he used the Vox AC30 along with a guitar that his father built for him. So I bought myself an old 1961 AC30 and built myself a guitar copied from Brian's own, fitted with the original Burns pickups. I used the Brilliant channel and the sound, while quite good, was not quite right, which is when I realised he also used a treble booster before the amp. 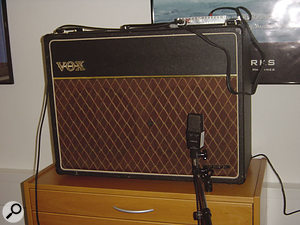 Part of Stefan's test rig, featuring a vintage Vox AC30 amp with his analogue treble-boost emulation on top."My next step was to try to simulate the exact sound of the vox AC30 using analogue, solid-state circuitry based around op-amps, diodes, FETs and so on. I finally settled on using op-amps and diodes, as that gave me the most design flexibility. During this work, I realised that the Vox is a very unusual amplifier that almost sings! It's both smooth and wild at the same time. There's a lot of information on the Internet about this amplifier where most people will tell you that it's a Class-A amplifier, but it's not really — it's actually a Class-AB amplifier. I tried to measure the behavour of every stage of the amplifier, and then copied it tube for tube, filter for filter, using my circuitry. It worked well and when I played through it, I could feel the same transient response as the real AC30, which is very important. You can feel the 'sagging' effect when you play hard and the noise drops away, then fades back in after a short delay. This turned out to occur naturally in my analogue version after copying each stage carefully, but the work was quite demanding and took me around two years.

"A student who turned out to be good with DSP algorithms helped me to program a software version of the amp using assembler language, and he's now working for TC, so he introduced me to the company. I'd originally done some work modelling the circuitry in the C language, and that was much easier than DSP code. It was also difficult to get rid of the quantisation artifacts that occur in non-linear systems such as distorted amplifiers. TC were impressed with my work, and so we decided that they would develop my algorithms for use on the Powercore platform."

I was curious as to how accurately Stefan had modelled the real amplifier, as it clearly isn't practical to model every single component. "I looked at the input stage and modelled that as one block. Then I modelled the phase-splitter stage, which is based around two tubes, and modelled that as one further stage. Then I modelled the power amplifier and output transformer as a further block, so this is a three-stage simulation. There's filtering between each stage: a low-pass filter before each stage and high-pass filtering afterwards. The splitter stage has some 'secrets' inside, such as the grid simulation where the bias offsets slightly under conditions of heavy distortion. The splitter stage was a complicated thing to model!

"The loudspeaker was modelled as a separate stage from the power amplifier. When you load the amplifier with a resistor, it works differently to a speaker which has a complex impedance. So I measured the loudspeaker and then modelled its characteristic so that it interacted correctly with my modelled transformer's characteristics.

"Brian May did a demonstration on the Internet where he used only the treble booster and the amp with no effects. I don't know how he miked it, but I listened to it and it was a very typical Brian May sound, so I tried different microphone settings with my original AC30 setup and a replica of Brian's treble boost circuit, and experimented with EQ settings to get much closer to this sound. That took me a further two weeks, then when I was happy that the sound was right, I used that combined speaker and mic response for my model.

"The completed plug-in includes an emulation of Brian May's treble booster, but users have a choice of four resonant frequency values: 4kHz, 2kHz, 1kHz or 500Hz, so that people who are using different guitars can still get close to the sound. And of course it means the user can get more sounds — not just Brian May's sound. I've also included three gain settings to enable the user to simulate by how much the treble booster overdrives the amplifier. Brian uses his guitar's volume control to move from a rhythm to a solo sound and the amplifier just responds to it. The model behaves the same way, so at low volumes it's clean and crisp, whereas at high levels it's like a wild animal!

"So far I have only modelled the Normal channel of the amplifier, which has no tremolo or top boost, though top boost will probably be added to the model during a future revision. I didn't model the Vox's Accutronix spring reverb because I didn't think it was particularly good, and in any event, that wasn't on the original models. I've also left off the Vox amplifier's one tone control, as this was simply a top-cut control and made the amplifier sound rather dull. My model still includes the effect of this control, but it is fixed in its brightest position.

The programming took a lot of time to get right, and I've learnt a lot about DSP programming in the process. As the TC engineers developed the code, I did listening tests at every stage. Now I think the result from the miked-up AC30 we have set up here sounds virtually identical to the sound of the digital model in an A/B listening test."