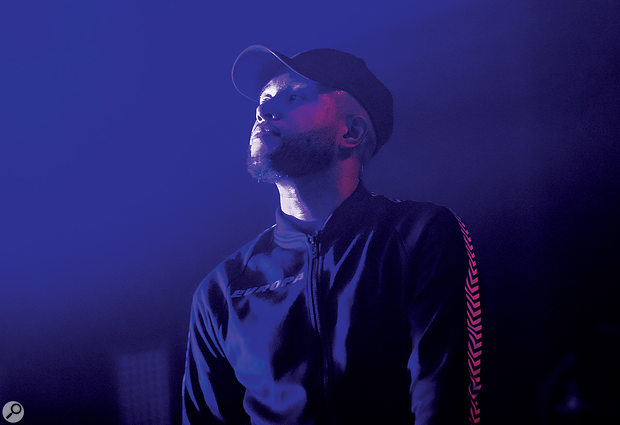 The success of Jax Jones demonstrates that there's still a role for old-fashioned musicianship in electronic music!

Jax Jones brings an unusually diverse variety of backgrounds to his work as a producer, songwriter, DJ and musician. "My father is from Turkey and my mother from Malaysia," explains the Londoner, whose real name is Timucin Fabian Kwong Wah Aluo. "I grew up with her and my stepdad, who is from Nigeria and a big music lover. He has a big record collection, with lots of tapes, CDs and vinyl, with music ranging from blues to rap — basically a lot of black music, and jazz as well. I also listened a lot to grime and, for example, admired someone like Skepta. So yes, I am mixed-race, and a lot of my life is about the contrasts between many different identities. I have always had this clash of influences. And I've been constantly searching for a place where I belong."

That search has powered an extremely successful career in pop and dance music, which started with his commercial breakthrough in 2014 as a featured artist on Duke Dumont's number-one hit 'I Got You' and has since yielded six top-10 singles and eight top-20 singles under his own name, plus the UK's bestselling dance album of 2019, Snacks (Supersize).

Jax Jones also enjoyed an unusually diverse musical upbringing. As well as learning to make beats on a computer, he mastered the guitar, played worship music in churches, and even enjoyed a stint playing electric guitar for London rap act N‑Dubz. "Because of her Asian background," explains Jones, "my mother's view of music centred on classical music. So I learnt to play classical guitar, until about grade eight. While the first tape I owned was a rap tape, I was also listening to classical music, though very much from an academic perspective: I was identifying chord changes and rhythms. As a result, when a song makes me feel good, I can understand why I like it. I started playing electric guitar at age 18 because I had heard somewhere that Slash was Turkish, or something like that! I played guitar like Slash, wanted to be an R&B singer like Usher, and to rap like Nas!

"I regularly played both acoustic and classical guitar in big churches, with a few thousand attendees every week. It's how I paid the bills for a while. It was serious stuff. There's a whole circuit for it. It was a baptism of fire every weekend. Some of the musicians I played with were amazing, and I learned so much. Many of them are self-taught, with very deep knowledge of chords and melodies. It's like being in a jazz band, because you learn to improvise and do everything by ear. People are often singing and creating a mood, and I was learning songs on the fly. It was really interesting.

"As I was searching for a place where I belong, I realised that the only thing that I'm good at is composing stuff. This was already the case as a kid. I had noticed that in classical music many players are amazingly good at playing what is on the page, but they might not be able to make up stuff from their own imagination. However, it was what interested me. I wrote my first song when I was 13, and luckily I had teachers who were willing to help me.

"My first equipment was a four-track cassette recorder, and I used to create tracks on that, recording loops, and writing songs and raps. I was trying to express myself. I recall the Men In Black soundtrack, with Will Smith, and when I was about 11 I wrote a Christmas version of it, changing the words and rapping them. It may have sounded stupid, but taking my influences from everywhere is still the way I work. I try to make something new from anything I have ever listened to."

The Song's The Thing

"I embraced electronic music about six years ago. At first, I liked it because it reminded me of rap music. What I love about it is that anything goes, especially in the house music genre. You can bring all your experiences to it. A few years later, after having been in front of a computer for a very long time, I realised that I'm also about playing instruments. In addition to playing the guitar I taught myself to play piano, bass and some drums — I'm a really shitty drummer! For me, that connection with instruments outside the computer gives me a real-life, tangible feeling, that I really enjoy. It's part of the human element in the kind of music I make, which is crucially important.

"That grounding in instruments really helps me with writing and production. Even today, 90-percent of my music is done by writing the song first, with the singer in my room. That definitely harks back to my experiences in...