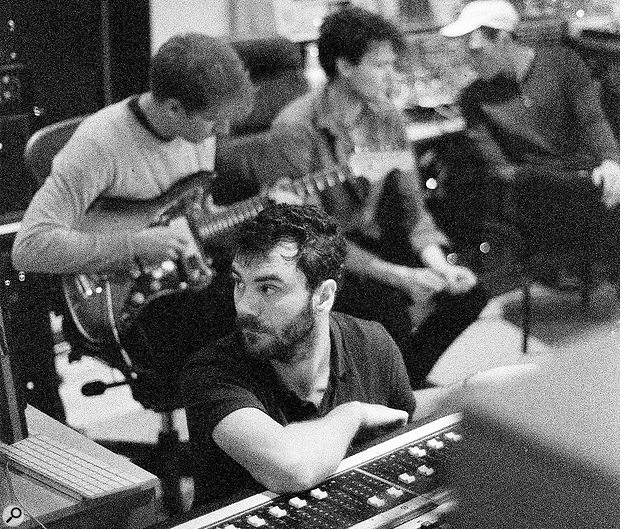 Matt Wiggins hard at work on a session with Glass Animals.Photo: Edmund Irwin-Singer

Engineer Matt Wiggins has worked with everyone who's anyone — and knows that he needs to be prepared for anything!

Grosvenor House, London, February 2019, and Matt Wiggins is excited to be at the Music Producers Guild Awards ceremony, where he's one of three nominees for Recording Engineer Of The Year. "We're all usually hiding in our little boxes everywhere," he says, "so it was nice to see everyone, you know? And just to be one of those three was amazing. I hadn't worked with Sean Genockey, but I'd assisted Guy Massey many years ago, and I'd never seen anyone move that fast, down underground at The Garden in Shoreditch. But anyway, there I was. And to win! Well... that was just next level."

The MPG had asked for some representative pieces of work, and Matt selected two tracks from V by the Horrors and one from Electric Light by James Bay. "I thought they showed quite a nice cross section," he says. "The Horrors were sort of loud, raging, heavy, but still quite varied within themselves: one track was in the dance area, the other pure heavy doomy. And the one by James Bay was one of the slower, more acoustic ones."

Up at the rostrum and clutching his gleaming Shure-shaped trophy, he thanked producer Paul Epworth for his support and encouragement through the years, he thanked his management, and he thanked all the great studios he's had the pleasure to work in. "And, of course, my very patient wife," he adds, "who always lets me go back to work and do another mix because the snare's not quite right."

Maybe he reflected, too, on all the artists he's worked with since he became a professional engineer back in 2006. It's a mighty list that includes Adele, Bloc Party, Coldplay, Lana Del Rey, Florence + The Machine, Glass Animals, Holy Fuck, LCD Soundsystem, London Grammar, Paul McCartney, Thurston Moore, the Stone Roses, Usher, U2, Will Young and many more.

And perhaps Matt thought back to one of the key decisions of his life, some 15 years ago, when he decided at the last minute to switch college courses. "I came very close to going to a different college and doing sensible subjects, like geography and business," he says. "Then, on the induction day, I thought, you know what? I'm so into music and DJ'ing and collecting records, wanting to know why one record sounds like this, why this one sounds loud, and so on. So the next day, I enrolled in a two-year music tech course at a Salisbury college and started there. It covered a cross-section of everything, technical, business, practical, gave me a nice broad sense of it all, and I certainly learned a lot."

Matt's snap decision was followed by a lucky break. With perfect timing, the assistant at a small studio just outside Salisbury had left the day before 18‑year‑old Matt finished his course. He spent a couple of years there learning the ropes, and when that studio closed in 2006 he made the inevitable move to London, handing out his CV to half a dozen studios, including Townhouse, Miloco and Olympic. Miloco replied and offered him a job as an assistant engineer.

Looking back, Matt reckons one of the reasons Miloco responded was because they had in place a proper work‑experience programme, and also because they were not simply a single studio. The Miloco group owns or manages a large number of studios, and so was able to offer more opportunities. "That was something I certainly feel lucky for," Matt says, "because it meant I got to assist in so many different rooms, of so many different sizes, and got to do so many different things. So I saw a VR tracking session, then I was on an SSL hip-hop session, and next in The Pool with Ben Hillier and those guys. You had to know all the rooms if you wanted to assist there. You had to know all the boards and know where everything was, all the synths, everything. I just got my head down and did the research. I tried to know as much about every piece of equipment and every studio as I could, so that when someone asked, 'Ah, have you sync'ed the 808?' I knew I'd be able to say yes. I got to the stage where I thought yes, I can do this."

He reflects on the fact that nothing much has changed when it comes to those crucial early breaks in the recording world. You have to be determined, he says, and you have to be lucky. And in his case, going to London, you need a base. "Yes," he says with a smile, "you've got to have a bit of help there. I could only do that initially because my girlfriend — my wife now — was doing a course at uni, studying in London, so I had somewhere to crash."

Matt's early Miloco days threw up some strange projects. One that left a particular impression was when he was asked to digitise six songs from Elton John's 1977 sessions with Philly producer Thom Bell. "It was just one of the gigs you get when you're starting out engineering," Matt recalls. "Don't fuck this up, you know? All you've got to do is put that in the computer. They'd got the two-inch from back in the day, baked it, so it becomes all excited and ready to play back. Here's the tape, and the tech guy's there as well, so you don't break it. And... it was phenomenal. I just pushed up the faders, and that's the record! It was just there. Push it up to zero, and that's the balance? They must have just recorded it like that. It was immaculately recorded. And this was not a fix-it-in-the-mix job. It was a real pleasure to hear that — just perfect, really." 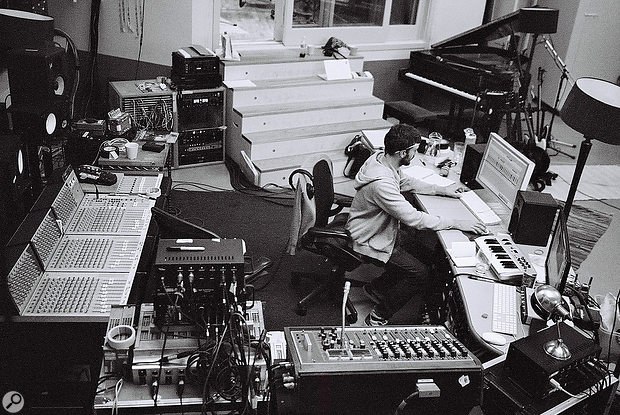 Much of Matt Wiggins' early career was spent at Miloco's The Pool studio, where he assisted Ben Hillier and Paul Epworth, among others.Photo: Ben HillierAfter a year or so, Miloco began to assign assistants to particular locations, and Matt was assigned to The Pool, Ben Hillier's place in London, just down from Tower Bridge. He describes it as a massive ex-warehouse. Back then, in the mid‑2000s, it was all one room. "So you were on headphones, there was a desk flopped in the corner, everything was a bit rough and ready — and it was wicked. It felt really special, a brilliant place to assist in, because you could just see everything. There were no tie-lines or anything. I would get my mic, put it in the back of the preamp, and that came up in 'Tools. That was it. Seemed so simple, so logical. I always worry when you go to an older studio about how old the tie-lines are that we're using there. There could be a mile of it under the floor. And I really just wish I could plug this microphone into the back of the preamp. The cleanest path. And in The Pool I could do that and see it, which was great."

He began working on a series of inspiring sessions at The Pool, and witnessed the transformation of the place as it was remodelled. "You could choose whether you have the desk in the new control room, or just as it was, on the floor. So that was a great learning experience, finding out more about the cabling side, racking everything up properly so you could transport it up into the control room and back again as quickly as possible."

Not only did Matt assist Ben Hillier there, but he also began to assist producer Paul Epworth, marking the start of a long and productive working relationship. The early sessions, around 2008 and '09, included album projects with Florence + The Machine, Jack Peñate and Bloc Party. The Florence sessions were for some of the songs that ended up on Ms Welch's first album, Lungs, released in Summer 2009, and Matt remembers them as quite special. "We had a big projector," he says, "and Paul would project these massive images of the cosmos up on to the side of this huge warehouse studio, taking up the whole of one wall, and Florence would be singing a vocal, waving her hands around like some possessed thing. That's one that will always stay with me."