Sessions for Coldplay's 2014 album Ghost Stories were also memorable. Most of the early work had been done at the band's Bakery studio in Hampstead, North-West London, but Matt's part of the process took him to the Henson studio in Hollywood, famed for its connections with Charlie Chaplin and then Herb Alpert's A&M label, and more recently owned by the Jim Henson Company. Matt likens it to the Abbey Road of LA, with massive rooms that, he says, sound incredible.

"Coldplay were there, their engineer Rik Simpson was in Studio D, and Paul Epworth and I were in A. We brought in a modular synth and a load of toys, and then Spike Stent was mixing down the corridor. Rik would be tracking, he'd send us the files, and Paul would do loads of production on it, adding bits, noises and stuff. Then Chris Martin would come in and try some vocal ideas with me. We'd ship that off to Spike, get a mix, and then the next one would come in from Rik. They'd done a fair bit of the record by that point, so there was plenty of little bits, trying out ideas to see what stuck."

Paul McCartney seemed to feel right at home at Beethoven Street studio, which was Paul Epworth's studio at the time, when Matt engineered some tracks that made Macca's 2013 album New. It was odd, he recalls, looking through the glass at the small West London studio and seeing Paul McCartney on drums. "He was playing a '60s Ludwig kit, too, so it was just like a Ringo kit. And there's Epworth on bass... it was surreal!" They went on to do the proper tracking at Studio 1 at AIR, on the big Neve console there.

McCartney, Matt reports, is certainly not inclined to mess around, and he works you hard. "I was trying to keep up and I was just knackered. He's certainly got pace. And he's so quick at playing everything and getting the ideas out. I remember 'Queenie Eye', sort of a hip-hop Mellotron thing — we recorded some of that at Paul [McCartney]'s studio, and the classic Mellotron was there. I was afraid to touch anything! When he did stop, though, after working at such a pace, he'd tell all these stories from back in the day. You're trying to play it cool, but really... another one of those situations where I just couldn't believe it was happening." 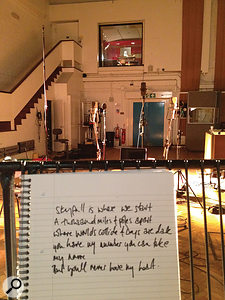 A career highlight for Matt was his work on 'Skyfall' by Adele, the theme song from the Bond movie of the same name.Photo: Joe Hartwell JonesMatt experienced a further 'pinch me, is this really happening?' moment as he walked into Abbey Road to engineer Adele's 'Skyfall', the theme song for the 2012 Bond movie. "It blew my mind going to work there. We'd demo'ed it all at Beethoven Street, but now we were tracking it at Abbey Road's Studio 2 with top-notch players. I got to go mad on all the microphones, because they've got them all. And Adele is just another level. We had the best equipment and the best singer."

Matt worked with Paul Epworth, again, to track the choir and the rhythm section of piano, guitar, drums and bass in Studio 2. The horns and the strings were then done in Studio 1 by the team recording the orchestra there for the movie cues. "Paul's role when it came to the orchestra was making sure the players got the quite subtle rhythmic things that go on, the swing of it," Matt says. "Quite a bit of work went into making sure the punctuation was on the right beat in terms of the swing. It was incredible to see that whole team of people working together: the communication was so slick and everyone's role so well defined. There's a little balcony bit where you can go and sit, so you're kind of within the main studio. And just to feel the air moving with all that brass going off, it was so powerful. I'll never forget that, and wandering down the hallways seeing all the tape machines and desks just sitting there, and walking down the famous stairs to the Studio 2 floor. Couldn't believe it. An engineer's dream. And then we got to go to the Skyfall premiere, as well!" 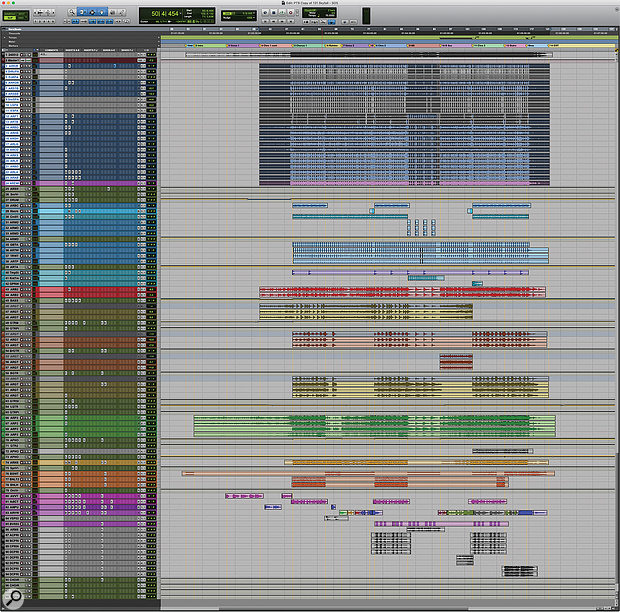 This composite screenshot shows the entire 'Skyfall' Pro Tools session.Adele's vocal heard on the final mix showed the value of keeping everything from all stages of a project. "Some of the early scratch vocals that she did with Paul at Beethoven Street ended up being used," Matt says. "I always try to make sure when I'm doing initial tracking with a band that I get a guide vocal. So often, those takes end up being the ones, or the quick scratch vocals they do whilst laying down the piano or whatever at the same time. I've lost track of how many times that becomes the one in the final mix."

Matt went on to work with Adele on her 25 album, winning a Grammy as engineer on this Album Of The Year in 2017.

One of the most recent releases that Matt mixed was 'Come Back To Me' by Art School Girlfriend, which came out as a single on the day of our interview. Matt's a fan of Polly Mackey's beautiful atmospheres, which he describes as almost shoegazey but with some dark, icy electronic elements. Most often for his mixing jobs he'll receive a Pro Tools session with a monitor mix that presents the ideas of the producer, the artist, or both. Where possible he'll have a phone chat to find out how the particular piece of work fits in with the artist's contemporary releases, as well as the technical direction they might have in mind and the mood they want to convey.

Reference tracks, usually through the convenient medium of Spotify playlists, can help identify sonic benchmarks, and he might spend some time researching back catalogue if he doesn't already know it. With 'Come Back To Me', Matt and Polly went back and forth with a few mixes over email, adjusting as they went. "And then, as is often the case, she came down at the end of the session to do the final little bits with me," he says. "Mostly, with this one, that was to do with a live kit that had been overlaid at the end under some programmed beats. The main thing there was for us to get the balance between those two to where we wanted it. More of a taste thing, really, sitting the live snare with the programmed snare.

"I really like it when production and writing gets across an energy or atmosphere without being overblown, without using piles and piles of stuff to get there. With Polly, it's always chosen so well — every element has been thought through. To me and my mixing, it means I can bring everything out in the mix. It's all playing a role, it's all got its own reason for being there. Good production and writing means that it all counts. There's no fat, and everything's working together."

Over the last few years, Matt Wiggins has developed and become more focused on the mixing side of his work, with tracking work less frequent. For just over a year, he's had his own second-floor studio space at Strongroom in Shoreditch, East London. The room is perhaps six by three metres, with a booth and an entrance hallway-cum-storage area. He also has a window. This, he says, is an important feature, one that keeps him sane. "It's most interesting on Friday nights and the weekend," he reports with a smile. "There can be absolute chaos happening outside, and here you are just looking down upon it. But I do have a blind, as well." 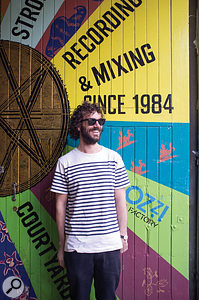 Having his own space at Strongroom has helped with his moves to concentrate on mixing. It means, for example, that it's easier to have a few projects on the go at once, that he can be more flexible in order to adapt to the often unpredictable nature of the job. It's quite common that if he's mixing a record he won't get all the material at once. It's usually a juggling act, he says, and if files are delayed, well, he can pick up one of the other projects he's working on. "At the minute I'm really enjoying working on lots of projects, and often they create ideas for each other. Something might not be right for this, but maybe it'll work in this track, or for this artist. It means I can keep things fresh, maybe, rather than just getting stuck in my ways, using the same things through the same stuff. Personally, I find that the most exciting thing."

He has a Pro Tools HD Native system with a couple of UAD Octo Satellites running on a new Mac Mini, which he reports to be "really nippy". Plug-in faves include some by FabFilter ("simple, get-the-job-done, intuitive"), many of those UAD ones, and the Waves Abbey Road collection ("a bit more grit, a bit more colour"). Hardware inserts? "I just got a great Overstayer Modular Channel," Matt says, "quite bananas. It combines something like an MS-20 filter section with EQ and compression, distortion as well, and then you can blend it all in parallel or in series. I used to do that with five bits of gear, but this tackles quite a lot of stuff in one box." He also has the UA 1176 Anniversary Edition, which he praises for its combination of the best of a few models. He has a little EMT mixer, too, with a system for A/B‑ing it against a wholly in‑the‑box mix ("sometimes the EMT can make stuff wider and help with separation").

Monitors include PMCs and some NS10s with a sub. And how about microphones? "If I'm lucky enough to have a [Neumann] 47 or a 67, I start there. But I really like the LOMO mics, a lot of the Russian ones, MKL and Oktava, they did some cool ribbons. They're quite expensive now, unfortunately. So, I aim to start with something that I know will probably work, like a 67, and then have another option, like a dynamic, say — the opposite, basically, to see what works. It's easy to fall into the trap of just playing it safe."

It's invaluable not only to be in a building with several studios but also to be among what Strongroom describes as a thriving community of producers, songwriters, artist managers, labels, publishers, and production companies. "We have a tech department here, too," Matt says, "a maintenance department, which is incredibly rare. That's saved my bacon a few times. But it's more the people that are so important for me. I can have a chat, and especially if I'm doing a lot of unattended mixing, it can be good to see another human now and then. I do get out and do the odd tracking session, as well, but it's good to have a base, and I'm very happy here."