On a more prosaic level, Matt was continuing to find out what it takes to be a good assistant engineer. And it's not necessarily an intimate knowledge of mic preamps. "On the Florence sessions, I had to make sure that the engineer, Mark Rankin, had everything he needed," Matt explains. "I had to be sure that everything was set up, everything was checked every day that it was going to work, everything was tidy and in place, and that I knew where everything was. That way, if they needed this or that, I could do it in a split second, with no waiting. No one wants to wait for anything. That's just boring. And as well as the technical side, I had to be sure they didn't have to worry about the food orders and all that, the running side of it as well — taxis, stuff like that."

He learned quickly enough how important it can be to try to second-guess the way a session might go. "So I'd listen in to the conversation, and if anyone mentions, say, 'We'll do the Hammond later,' then I'm prepared. Get the Hammond set up, find the microphones I think I might want, get it all ready. Then when it comes to that point when they say, 'Shall we do Hammond?' it's like yes, we're ready to go. All they need to do is choose the preamps or maybe swap out some microphones, but essentially you've done it all. There's no waiting to go, no Leslie to wheel down the stairs. It's all just there. And I was working on so many varied sessions, which meant I got to see so many things. You take note: right, that works really well, or that didn't work really well, maybe I'll avoid that one. You have to try to keep your eyes open and take note."

Among the highlights of Matt's more recent tracking work were the sessions for the Horrors' last album, V. He'd assisted on the band's first album at The Pool, but by this time they had moved up quite a few notches, and he engineered and mixed the record at The Church in Crouch End, North London, which Paul Epworth has owned since 2013.

The project began in the smaller Studio 3 downstairs, thrashing out ideas in what amounted to a pre-production phase, and then shifted up to The Church's big Neve room, Studio 1. Matt was keen to have everything patched in and ready to go, and for the main setup there he had drums, bass and guitars going into the 24 channels on the left of the EMI Neve, with the secondary guitar-amp mics sharing the same guitar channels, but using external preamps instead of the Neve's 1091s. That left the right-hand side of the board free for pianos, synths and effects returns, as well as 'floating' general-purpose mics that could be used for anything else that popped up, like percussion, say, or acoustic guitar. 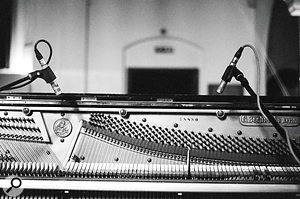 Sessions for the Horrors' album V took place at Paul Epworth's The Church studio, and offered plenty of scope for experimentation.Photo: Matt Wiggins 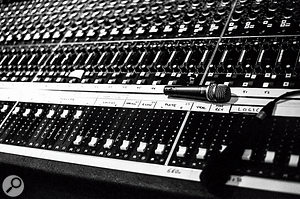 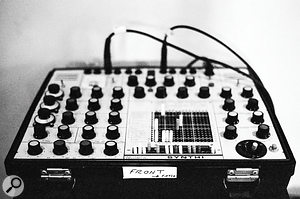 He had a lot of mics for the drums, but his scheme meant there was flexibility in the range of drum sounds they could create from one setup. Often, he recalls, only five or six were used, and in some song sections he could cut down to fewer to create a change in dynamics. "With various room-mic options, including both clean and crunchy already in position around the room, it gave me the option to record additional mics spontaneously, without having to set up anything new and miss the moment," he says. "Say we were doing handclaps: I could simply swing over the [STC] 'ball and biscuit', which had the Culture Vulture stereo distortion on, so it added a different flavour."

When the option exists, Matt favours tracking at least the drums to tape, finding this smooths the top end and adds roundness to the lows. In this case, he used the Church's Studer A80 MkIV for the first 24 channels on the console, so that all the drums, bass and guitars were recorded to tape. There was also plenty of scope for creative engineering, such as on the rolling synth line on 'Ghost', where Matt played back the track at half speed and keyboardist Tom Furse overlaid a rising-and-falling organ pattern through a load of pedals. For 'Gathering', he used a Neumann binaural dummy head for the stereo acoustic guitar sound. "Josh [Hayward] double-tracked using different guitars on either side of the room," Matt says, "and we kept the head in the same position. Actually, we also used the head for lots of percussion, BVs, and other room-mic duties — it really adds a great sense of space around the instrument."

For mixing, the team moved back down to Studio 3 at The Church. Matt went through the tracks and did some preliminary work, mostly in the box. "But I used various chains of outboard on hardware inserts that I could pull up easily without re-patching, which gave me the same convenience as a plug-in," he says. "For the vocals, I had two options: a Neve 33609 compressor into a pair of Mäag EQs, or a vari-mu compressor into a pair of EAR valve EQs. The Neve/Mäag was fast, snappy and bright, in contrast to the rounder valve equipment."

He used an Empirical FATSO or his Kush Tweakers on the drums, both of which provided plenty of grit. "A lot of the effects had been recorded at the time," Matt says, "so it was great to have the option of the excellent earthy plate reverb and various tape delays and springs. I used an Analog Heat by Elektron to process various elements of the songs to add more distortion and saturation. The combination of outboard and in-the-box gave me the flexibility to try out different edits easily, or fly in new parts if they were added later."

The final push at The Church came with a shift back upstairs to Studio 1, where Matt could spread out mixes on the EMI Neve's central return section. Producer Paul Epworth, Matt, and the band worked through each of the songs individually, tweaking levels and trying out any final ideas. The mixes were printed back through a Lavry Gold converter and sent to Mandy Parnell for mastering.

Working on every phase of the V album sessions, from pre-production demo stage through to engineering and mixing, gave Matt a clear idea of where the band wanted the record to be. "What's great is that you've seen the tracks develop, and you've built such great relationships," he says. "That was so valuable, because you learn a great deal about their musical tastes, the subtle nuances of their likes and dislikes. It all really helps inform the decisions in the creative process."

Another memorable Church experience came when Usher recorded 'Chains' there in 2015, again with Paul Epworth producing. Matt watched slack-jawed as Usher's entire touring band trooped in: DJ, drummer, horn section, pianist, programmers, the lot. For Matt, this meant using every single input of the 73-channel Neve, even doubling up some. "I put everything on input, and I hit Record as soon as I heard someone tinkling on piano or whatever. I could see them working it out, these top musicians. Then the bassist came and looked over, started jamming, then the drummer wandered over from dinner, sat on the kit — we're still rolling — tapped a tempo and got a grid." 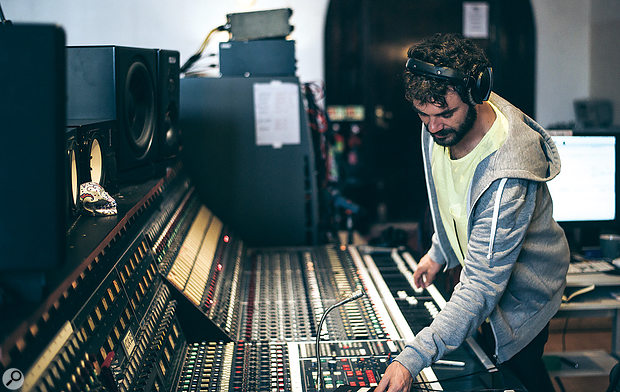 Matt has enjoyed a long working relationship with Paul Epworth, and is often to be found behind the enormous Neve desk at The Church. This photo was taken on sessions for James Bay's forthcoming second album.Photo: James Boardman

Next, Matt faded up a metronome, and everyone began to groove into that. "They would join in, thrash out an arrangement, and they'd start again from the top. And all the while Paul would be running around shouting stuff: Try this! Do that! That's too long! Drop this here! We were recording for over an hour, the same bit of audio, because I had everything in Record, ready, from the moment I heard the pianist start up from something he had in his head."

The band got to the middle eight, and someone asked what they might do here. They stopped and worked on that for a while, then it was back to the top to play it down. "We're still rolling," Matt says, "so they're through it, they stopped, looked at each other: 'OK cool, yeah, done!' I hit Stop — we're printing a two-track at the same time — and it's 'Right, we'll send that to the studio downstairs.' Which is where they had a few vocalists to try out some ideas on it. And for me, getting to work in that level of studio with that level of musicians, well... that was just such a highlight for me."

Working with U2 on their Songs Of Innocence album at The Church and at Shangri-La in Los Angeles provided a different kind of mixing job. Matt recalls U2 as very hard workers. He was impressed by the level of detail they went into, investigating every avenue to make sure the song is as good as it can be. "There would be many different versions and many lyrics," he says, "and then I'd be working with their engineer to combine all these versions and all the requests that came in, all the new vocals I've recorded that day, trying them out in different versions."

When they returned to The Church, Matt was in the B room mixing while U2's engineer Declan Gaffney was in the Neve room recording and tracking. "Stuff would be fed in and changed, and I'd be on... I guess I'd call it a rolling mixing duty. It wasn't mixing in a traditional sense but was more like trying to bring ideas from the balance or from the sonic point of view. We weren't looking at it as if it would be a final mix, necessarily. It was like: here's the track, try out a few things, see if you can try some things with the balance, and we really like these references. And then I'd spend a few hours on it and present it, and maybe they go with this part but suggest trying something else here or there. That was quite exciting, because it was between the two worlds of engineering and mixing."