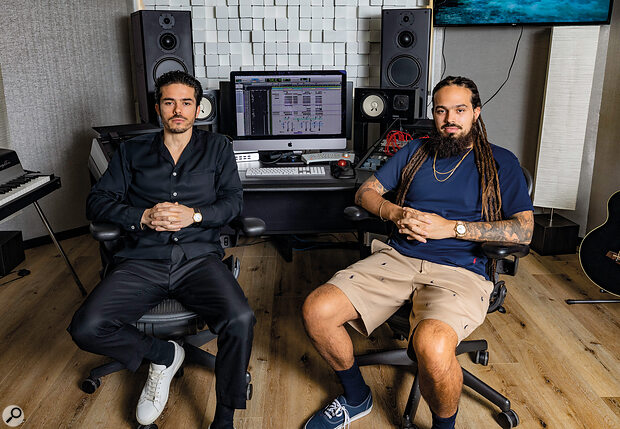 Pop writing and production today is a team game, and the Monsters & Strangerz are one of the hottest teams around.

It is not about us, it is about the song. It’s not about ego, it’s about creating the greatest song possible.

Speaking are Jordan and Stefan Johnson. Despite being two of the world’s most successful songwriters, their names may not mean much to most people, and it’s how they like it. “Being artists would stress us out too much. We’re already so worried about what people think about songs that we were involved in making that we don’t even know what we would do if a song was released under our name! We love our job, and being on our side of the glass, in service of the person on the other side, the artist.”

In sitting on their side of the glass, the Johnson brothers are, they stress, “producer/songwriters, not songwriter/producers. We come from a producer train of thought and we get our hands dirty in the songwriting. But we are primarily producers. It’s a constant struggle, because as a producer you want the production to be incredible, but as a songwriter you want to stay connected to the emotion of the song. You don’t want to take away from the feeling the song gives you, and be thinking, ‘Oh, gosh, the sonics of this beat are so amazing.’

“We don’t make decisions like: ‘Let’s add that synth sound because it is so incredible.’ If for some reason it distracts from the vocal melody, we scrap it, and you have to be OK with that. There definitely is a push and pull between sometimes doing too much in the production, and then needing to pull back again, and finding the middle ground where you get a production that you love, and yet the song still lives on top. What inspires us every day is the chase of writing huge songs. Songs that the masses love and enjoy. Is this a song that everybody is going to adore?”

Jordan and Stefan Johnson are part of a collective called The Monsters & Strangerz, who have been making waves since 2010 with chart hits by the likes of Selena Gomez, Kylie Minoque and Chris Brown. The collective shot through to the super‑big‑time in 2018 with Zedd’s worldwide mega‑hit ‘The Middle’, and the brothers themselves have been involved in the writing and production of chart‑topping songs by Katy Perry, Justin Bieber, Dua Lipa, Miley Cyrus, Maroon 5, Camila Cabello, Halsey, Ellie Goulding and many more. They have received two Grammy Award nominations, and in 2021, three BMI Pop Awards.

“Music was always a big part of our life,” explains Jordan. “Our dad plays drums, our mother piano and dances and sings. Curiosity about music was always big for us. When in high school we only listened to rap music, and were always looking out for the latest releases.”

Stefan adds: “Our stepdad also was a DJ in the ’80s, and he had turntables in the house. I think when I was 15 we went to the SAE Institute [School of Audio Engineering] in Miami on a whim because they had an open day. When I was 17 it was like, ‘Let’s go there.’ Jordan is a little older than me, and we both attended because we wanted to be in a place where things were done that we were passionate about.

“I got more into the technical side, Pro Tools, sound-shaping, engineering and recording, while Jordan got more into making music and composing tracks. After we left the SAE, I became an intern at a studio called Studio Center Miami, and worked my way up to become one of the main engineers. I arranged with the studio owner that Jordan could set up in a small studio in the attic, to make tracks. So I was doing sessions, and Jordan was making tracks upstairs.”

Jordan: “At this point we met Alexander Izquierdo, also known as Eskeerdo, who is a rapper and a topliner. Alex was a super good lyricist, and we started writing pop songs with him. Soon afterwards we also met Marcus Lomax and Clarence Coffee Jr, who called themselves the Strangerz, and who were also writing songs. There wasn’t a huge community writing pop songs in Miami at the time, and we were like: ‘Let’s link up together.’ So we became the Monsters & Strangerz, which is a collective of people who make music, sometimes together, sometimes separately.”

Everyone in the Monsters & Strangerz, says Jordan, “really had fallen in love with writing songs. Production and making tracks is fun, but writing a good song is much more difficult. Anyone can write a song, but writing a great song that lots of people love is one of the hardest things to do. It became an everyday challenge for us, and learning what people like in songs, and how to improve. Of course, it’s subjective, but when you really start to craft songs that people like, you find that there are certain note choices and intervals that come back, and chasing that is exciting.”

“Our early influences were producers like Timbaland and Polow da Don,” continues Jordan. “They were the people who inspired us when we got into making music. I still remember when Justin Timberlake’s album FutureSex/LoveSounds came out [2006]: the sounds were so new and different. That was our first inspiration. But when we started falling in love with writing songs rather than making tracks, we started looking at people like Max Martin and Quincy Jones, at the entire composition, ie. melody, lyrics and chords, as opposed to just focusing on the beats.”

As the Monsters & Strangerz cut their teeth in Miami, trips to LA to make new connections and get work at a higher level became more frequent. They had very little money, and splitting a hotel room was a lot cheaper for a “community of five”, as Jordan calls them. By 2011, they judged that the time was ripe for all of them to move to LA. The collective ended up renting a studio and developed regular collaborations with a variety of songwriters.

“When we arrived in LA, we could split the costs of renting a studio between five people,” says Stefan. “It made it much easier. All five of us were like family, the closest of friends. Over time things have evolved, and by now Coffee has moved to London, where he’s crushing it with Dua Lipa, and Eskeerdo has moved back to Miami, where he is doing his thing. Marcus is still in LA working on lots of good projects. We also teamed up with an amazing producer called German [Oliver Peterhof], and work regularly with the likes of Jon Bellion, Ian Kirkpatrick, Jason Evigan and Andrew Watt.”

Splitting songwriting royalties between five people could get more complicated than splitting rent, but so far, it’s worked out OK. Jordan: “We call our agreement ‘you eat what you kill’,” says Jordan. “If you work on something, you get your share, if you don’t, you don’t. So whoever works on a particular track gets to reap the benefits. The Monsters & Strangerz is a group of friends, and not really a business. We have the foundation of being like a family, but we operate as individuals as well.” 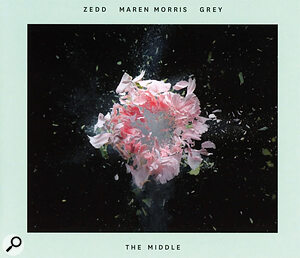 From 2011 to 2018, the Monsters & Strangerz “were doing great and working hard on songs by Maroon 5, Nick Jonas, Chris Brown and so on”. Then came Zedd’s monster hit ‘The Middle’, which they co‑wrote with Zedd, Sarah Aarons, Kyle and Michael Trewartha (aka electronic music duo Grey) and Marcus ‘MarcLo’ Lomax of the Strangerz. The song was co‑produced by Zedd, Grey and the Monsters & Strangerz, and took several months to...