Inside The New Blood Tour By Ian Corbett

Transforming Peter Gabriel's Scratch My Back into an impressive live experience required an orchestra, a team of top engineers and just the right selection of gear. 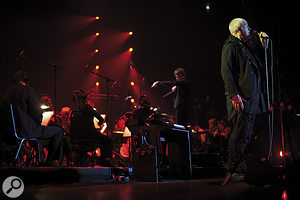 Peter Gabriel's latest release, Scratch My Back, is a set of covers, but it's no ordinary covers album. It consists of arrangements for orchestra, stripped down to their bare essentials, over which Gabriel delivers a gripping and emotional vocal performance. Not the easiest material to reproduce live, but that's exactly what Gabriel did for last year's New Blood tour, which presented the album in its entirety along with some Gabriel classics, all arranged for a 55‑piece orchestra with no drums and no guitars.

Taking this type of show on the road presents the live engineer with unique set of challenges, and Sound On Sound caught up with the crew at New York City's Radio City Music Hall to discover just what's necessary to ensure top‑notch sound-quality on a such a production.

Power To The PA 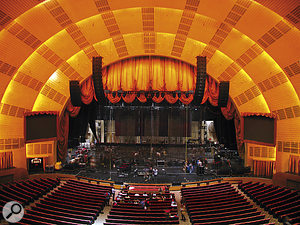 The Radio City Music Hall just before soundcheck. Here you can see the substantial line arrays that make-up part of the PA setup.The preferred sound system for the tour was a L'Acoustics VDosc or EAW system, but for the Radio City show, logistics dictated that the in‑house JBL VerTec array be used, consisting of 15 VT4889 full‑size line‑array boxes and two VT4800 compact line‑array boxes above each side of the stage. QSC Powerlight 340 and 380 amplifiers were used to power the VerTec system, while two arrays of VT4880A subwoofers flanked the main columns. Beneath the three Mezzanine levels modified EAW JF‑80s powered by QSC 1.8 amplifiers served as under‑balcony fills.

Front-of-house engineer Richard Sharratt chose a DigiCo SD7 as the FOH console for the tour; using several fader layers, this allowed him to cope with up to 128 inputs. Preamplification and A-D conversion was handled by units on stage, and Sharratt also submixed the orchestra and sent groups back to the stage to the two monitor mixers via auxiliary sends. Monitor mixing for the orchestra was handled by Britannia Row Productions veteran Dee Miller, using a Yamaha PM5D console to balance the stems he was receiving from Sharratt:stereo submixes of the first violins, second violins, and violas, and mono submixes of the cellos, basses, woodwinds, brass, percussion, and Gabriel's vocals.

Peter Gabriel is notorious (in a good way) for being a perfectionist, and also for keeping a record of everything he does. This is true in a live setting as well in the studio. Each night of the tour was therefore recorded using multiple Pro Tools rigs. Two HD systems functioned as multitrack recorders, while an LE system recorded a stereo board mix. (On previous tours, Gabriel has made each night's show available to fans via download, but due to regulations involving orchestral musicians, this is not possible for the New Blood tour.)

Managing this many systems and people around tight, union‑mandated schedules meant that soundcheck time was precious, and a secondary benefit of having the Pro Tools setup was that recordings of previous shows could be easily played back in the next venue and used as 'virtual soundcheck' material before the orchestra actually arrived to rehearse, in order to give the engineer a head start once the soundcheck and rehearsal began. Even before the tour, Sharratt explains, "We had just one day of full production rehearsals in Shepperton Studios. That's not a lot of time to get a 128‑input show in order!” 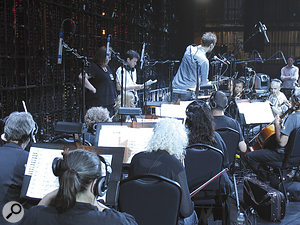 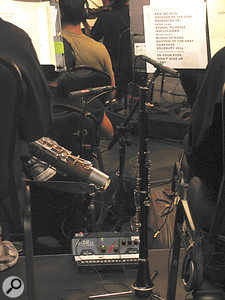 Schoeps CMC5s were also used for the woodwinds.More Schoeps CMC5 and MK4 combinations were used on the small woodwind section, which consisted of a flute, oboe, clarinet, and bassoon, while 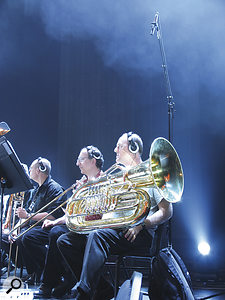 Wide‑cardioid Schoeps MK21 capsules were used on CMC5 preamplifier bodies for the brass section. Here the mic is high above the tuba.the eight members of the brass section were each miked with a wide‑cardioid MK21 capsule on a CMC5 preamplifier body. Percussion miking consisted of a pair of CMC5s with MK4 capsules on the marimba plus one each on the crotales, vibraphone, bass drum, and for assorted percussion 'toys'. 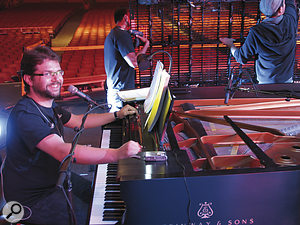 A pair of Schoeps were used over the grand piano, augmented by a Helpinstill 180 noise‑cancelling grand‑piano pickup.Yet another pair of Schoeps mics was employed on the acoustic piano. These were assisted by a Helpinstill 180 noise-cancelling grand-piano pickup, a product designed both for touring and feedback rejection, but even so, at Radio City, the default placement of the piano far downstage caused some feedback issues under the downwards‑firing front‑fill speakers of the house line array. These were rectified simply by moving the piano a little upstage.

Richard explains that putting similar Schoeps combos on much of the orchestra is something he's done for a long time with classical work. "A good all‑round mic across the orchestra gives everything the same characteristic, so you just need to EQ the system globally, with tweaks here and there.” Using so many smooth, flat‑response mics can help to minimize potential feedback, with fewer problem frequencies to control than if multiple different microphones (each with their own unique set of frequency-response peaks) are used.

With 66 inputs for the strings alone, it's easy to see how the total number of inputs exceeded 120. Equalising that many channels individually would be a daunting prospect, so where possible, EQ was applied across stereo group channels. "I generally EQ on channels for obvious traits on an instrument — for example, cut at 2.5kHz cut for DPA mics on violins — and I use group EQ for adjusting how things sound from venue to venue, as well as notching‑out feedback.” On just about every orchestral input the on‑board compressors were "tickled” just for a little control. A rock concert audience also expects chest-thumping low end, so the pickup and mic combination used on each of the four‑string basses and the close-miked orchestral bass drum were boosted just enough to easily substitute for the frequency space otherwise occupied by the kick drum and bass guitar in a rock mix.

The only effects used for the show were top‑quality reverbs. A Bricasti M7 and Quantec Yardstick provided natural-sounding spaces around Gabriel's vocal, while reverb for the orchestra was handled by Lexicon 960s. Richard elaborates: "The Lexicon was split into four engines: three for the orchestra, most of the time strings, woodwinds with piano, and brass with percussion, with a bit of swapping between songs. The fourth engine was used for the backing vocals.” 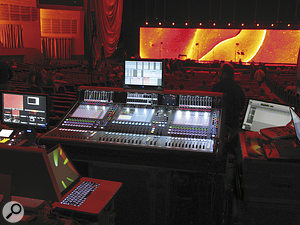 The DigiCo SD7 and multiple ProTools rigs in the front‑of‑house position.

With so many musicians on stage, you'd expect the musical content of the tour to be set in stone, but this was not the case. The first half was fixed — the entire Scratch My Back album was performed — but the second half changed from show to show. Arranger and orchestrator John Metcalfe and his Sibelius system travelled with the tour, and not only were songs re-ordered, added and removed, but arrangements were worked on and tweaked in between shows.

The equipment for the US leg of the tour was also improvised to an extent, thanks to the volcanic eruption in Iceland that disrupted air travel. A resulting customs impound and delay meant that a splitter system had to be constructed from scratch to get the signals to the multiple consoles. The crew and production company scrambled and the original, compact system (now impounded) was replaced with about seven flight‑cases' worth of equipment put together by Firehouse Productions... and the show went on!

Following some on‑tour reworkings of the orchestral arrangements of Gabriel's own material, the team went into the studio over the summer of 2010 to recording those tracks, which are likely to be released during the autumn of 2011. A string of European dates followed in the autumn of 2010, and the Verona concert was filmed for DVD, although there is no scheduled release date at this time. In March 2011, New Blood was also filmed over a couple of nights at London's Apollo Theatre, in 3D. This time the focus was Gabriel's back catalogue. At the time of writing, a theatrical release of this is proposed (but not confirmed) for September 2011, with 3D and 2D Blu‑ray and standard DVD following in November 2011. This back‑catalogue focused tour continues in the USA and Canada over 12 dates with the New Blood orchestra, this June. I have my ticket!

Many thanks to Richard Sharratt and production manager Gary Trew for making this in-depth look at a unique show possible. 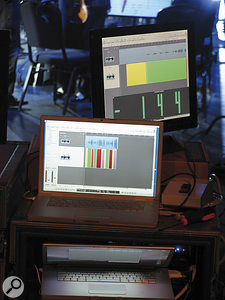 Richard 'Dickie' Chappell, Gabriel's long‑time studio person, engineer, and live sound man, was mixing Gabriel's monitors for this tour. Dickie is the person responsible for taking Gabriel's projects from the studio on to the road, helping the tour manager Dave T to find the best sound crews, and handling the audio logistics of the shows — from selecting what mics and PA systems will be used to how to record the show, to a myriad of other essential responsibilities! In addition to receiving the same orchestral submixes that were sent to the Yamaha PM5D desk, his Digidesign Venue system also received the FOH reverb outputs.

Gabriel's monitoring setup consisted of his IEM system, plus a pair of L'Acoustic MTD108 wedges, a pair of video monitors showing a visual song form and a vocal activity cueing system created in Logic, and another pair of video monitors allowing him to see the conductor, who was behind and to the side of him. Gabriel was not centre stage for the show, but downstage and house left. 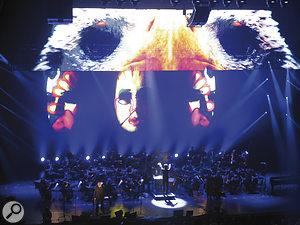 Both live and pre‑recorded video accompanied the music on the New Blood tour. They were displayed on four transparent LED video screens, three of which were positioned behind the orchestra and one in front of the orchestra, moving up and down throughout the show. The video was precisely sync'ed to the music, necessitating the orchestra following a click track. Gabriel's visual cueing system was also synchronised to this track. Here we see the cueing system, which reacted to the vocal performance, running in Logic, backstage.